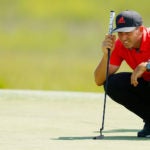 Sergio Garcia lines up a putt on the 18th hole at Harbour Town Golf Links on Saturday.

The coronavirus does not have a bias.

Sergio Garcia does. The coronavirus shouldn’t have chosen Nick Watney.

On Friday, Watney became the first PGA Tour player to test positive for Covid-19. Three days earlier, Sergio Garcia welcomed Nick Watney on his private jet, and they traveled from Austin, Texas, to Hilton Head, S.C., site of this week’s RBC Heritage. They are good friends, and Garcia said Saturday his good friend was a bad pick.

“I felt terrible for Nick because he’s probably one of the nicest guys on Tour,” Garcia said. “Unfortunately, it had to happen to him. So there’s a lot of other people that probably deserved it a lot more than him, and he’s the one that got it.”

For a few hours on Friday, Garcia said he was worried he would too.

Garcia and Watney had tested negative after arriving at Harbour Town Golf Links. Both played their first rounds on Thursday. Friday morning, Watney began experiencing symptoms and was tested again. The 11 people the Tour determined Watney came in contact with were too.

“It was about 4½  hours of waiting, very anxiously, hoping that it was negative because, obviously, after missing the cut last week by one and this week finally playing nicely in the second round and being in the middle of the pack, if I would have given positive, then I wouldn’t be able to play on the weekend, and I would have been very, very disappointed,” Garcia said.

After learning of his positive test, Watney was forced to withdraw, and he will have to quarantine for at least 10 days. Watney also texted Garcia. He called him. Garcia said Watney told him he was sorry about 25 times.

Garcia said “it was all good.”

“Whatever it is, it is,” Garcia said. “Fortunately for me, it was fine. Hopefully, his is not bad, and we can have him back as soon as possible.”

“If he would have not had that Whoop or whatever you call it, he would have played, and nobody would have noticed,” Garcia said. “Nobody would have known. But Nick is – it shows the kind of person he is. He saw that something was a little bit off. He commented. He talked to the doctor, and a lot of other people probably would have just kind of gone on without even thinking about it, but he was worried about not only himself, but all of us, and he got out and tested. That shows a lot to me from him.”

What if Watney had not been wearing his band?

“Unfortunately, that’s the way it is,” Garcia said. “I feel terrible about it. But unfortunately, it’s the way it is, and we all knew coming out here and playing that there’s a possibility of catching it some way. We’re hoping that no one gets it, but I’m sure that, unfortunately, he won’t be the first and he won’t be the last because there’s a lot of things that can happen. There’s so many unknowns about this virus that we don’t – we think we know a lot about it, but there’s a lot of things we don’t know.”