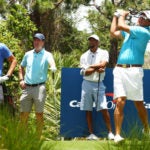 If you're looking for a guide on how to invest your money in The Match II, here are a few suggestions.

I cannot shake the feeling that betting this match is too easy. Tiger Woods is a better golfer than Phil Mickelson. Peyton Manning is theoretically a better golfer than Tom Brady. The Match II will be played at Tiger’s home course, practically in his backyard. Phil Mickelson’s game does not traditionally mesh well with the state of Florida. Tom Brady says his game is “s—poor.” He and Mickelson are supposed to take down the greatest golfer of all time?

The voices in my head are telling me a few things. They’re reminding me that Mickelson was made for events like these, while Woods does them somewhat against his nature. That Brady thrives under pressure and uncertainty, notably more so than Manning. That Brady’s golf swing is unquestionably better than his counterpart’s. That Keegan Bradley said Brady once took his lunch money, and James Driscoll said he played one stretch at Pebble Beach like a Tour pro.

But let’s not overthink this. Instead, let’s get to the betting board. If you’re wondering about my credentials, let’s just say you should have followed my advice for last week’s match and doubled your money. (I should have followed my advice, too — somehow I won 800 Internet Dollars and lost 20 real-life dollars. Anyway…) Here are 10 bets you should have in mind when you’re checking out the numbers for The Match II. Let’s start with 2000 Internet Dollars and spread ’em out accordingly — thanks again for my bosses at GOLF.com for the investment!

The first five bets come from FanDuel, while the next five come via Bovada.

The bet: I sort of feel like Brady is MOST likely to hit the first fairway. Who knows what’ll happen down the stretch, but to get plus money at No. 1? We’ll take it. Find your slot receiver, Tom! Nice short completion. $250 to win $255.

The bet: I don’t see the modified alternate shot going well for team Mickelson/Brady. $100 to win $500 on Tom/Phil to lead at the turn but lose to Tiger/Peyton overall.

The bet: Red is listed at -350 for Tiger, while Mickelson is listed at -285 to wear black. Both are nearly guaranteed winners. I’d have to take out a GOLF.com loan to bet enough money to make it worth my while, though, so let’s just move on without a technical bet added to the ledger.

The bet: They’ve made the turn and it’s time for Tiger Woods to take command of this match. At this price, there’s plenty of incentive for $200 to win $250 that Woods will take the greenie at 12.

The bet: Let’s live a little! With any luck the tees will be pushed up on a couple par-5s to make them reachable. Plus you’ve won your first nine bets, so there’s money to play with. The final bet is Yes, $250 to win $1500. What a moment this will be…