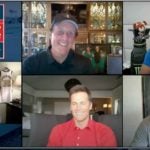 One participant said his golf game was somewhere between poor and pitiful. And he added a four-letter expletive before “poor.”

Another participant said the last time he played the golf course, he was so hard-pressed for golf balls by the time he reached the 18th that his options were a discolored one or a displaced one.

For “The Match: Champions for Charity” charity golf event, Tom Brady is teaming with Phil Mickelson, and Peyton Manning is teaming with Tiger Woods on May 24 at Medalist Golf Club in Florida.

Brady and Manning will also be leaning on Mickelson and Woods.

“Somewhere between s–t poor and pitiful,” Brady, an NFL great in his real life, said when asked to describe the state of his golf game, on a video to preview the event. “Unfortunately I’m focusing on football right now and I’m still working and golf will come at a later date, but I can get a little bit streaky.”

Manning technically would have been disqualified the last time he played Medalist.

“I’ve played the Medalist before with Tiger, and an old teammate of mine, Brandon Stokley, was with me, and on the 18th hole, I leaned over to Stokley and asked if I could borrow a ball,” said Manning, a former NFL great in his real life. “I was out of balls by the time I got to 18.

“And he said all he had was a yellow one left. I was like, ‘I cannot play a yellow ball in front of Tiger Woods.’ So we’re digging in the marsh trying to find one more ball so I could finish the hole.”

Brady’s and Manning’s partners are more than capable, with Woods winning 15 majors and a record-tying 82 tournaments on the PGA Tour, and Mickelson winning five majors and 44 Tour titles.

When Brady and Manning partnered together recently, they won nothing.

“But in golf, we’ve actually been partners a decent amount. Not a great record, right, Tom?” Manning said. “The last time we played we got beat by an 84-year-old and a 77-year-old. Like closed out on 15.

“I’ve had some disappointing defeats – I know Tom hasn’t had that many at all – but that was a tough one for both of us, so we’re each kind of upgrading in our partners this time playing with Tiger and Phil.”

Mickelson didn’t sound too worried. But he might sound different.

“I think I’m probably not going to be chirping as much as I had anticipated,” he said.