2021 WGC-Workday Championship live coverage: How to watch final round action at Concession 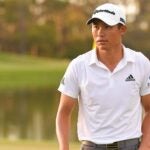 Collin Morikawa carries a two-stroke lead into the final round at Concession Sunday.

We’ve reached the final round of play at the WGC-Workday Championship from The Concession in Bradenton, Fla. Here’s everything you need to know to watch the action on Sunday, including tee time information and television schedule.

Through three rounds at the WGC-Workday Championship, the biggest storyline has been the event’s impromptu host. The Concession — Jack Nicklaus’ new course in Bradenton, Fla. — has stepped into the limelight after coronavirus-driven restrictions forced the PGA Tour to cancel on the tournament’s original host, Chapultepec Golf Club. All week, Concession has caused headaches for many of the best golfers in the world with its contorting greens and confusing undulation. On Saturday, No. 13’s devilish pin location led it to play as the hardest hole on the golf course relative to par.

Through the carnage has stepped an unlikely leader through 54 holes: Collin Morikawa. The reigning PGA Championship winner has found an extra gear putting throughout the week, managing Concession’s brutal greens to eight birdies in one 10-hole stretch Saturday. The 24-year-old is looking for his first victory at the WGC since the PGA last August, and only the fourth victory of his young career.

Behind Morikawa (-15) sits a star-studded leaderboard, including Brooks Koepka (T2, -13), Webb Simpson (4th, -12), Rory McIlroy and Patrick Reed (both T5, -11). That high-powered foursome — plus looming names like Abraham Ancer, Viktor Hovland and Scottie Scheffler — should give Morikawa all he can handle heading into the final round on Sunday. Also worth noting: a strong contingent of players are expected to sport red and black for Sunday’s final round in support of Tiger Woods, who is recovering from Tuesday’s car accident.

Below is all the information you need to watch the final round of the WGC-Workday on television.

How to watch WGC-Workday Championship Round 4 on TV

Golf Channel will air the early action for the final round of the 2021 WGC-Workday Championship with two hours of coverage from 12-2:30 p.m. ET on Sunday with NBC taking over from 2:30-6 p.m. ET.

How to stream WGC-Workday Championship Round 4 online

You can stream the final round of Golf Channel TV coverage of the 2021 WGC-Workday Championship on golfchannel.com. Fans can also view Featured Group coverage of the fourth round all day Sunday via a PGA Tour Live with a subscription.