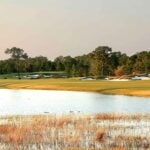 The name of the club comes from a historic moment at the 1969 Ryder Cup.

With Covid-19 still a part of our day-to-day lives, many adjustments are being made in order to conduct business as safely as possible. The PGA Tour has been lauded for its ability to maintain a relatively normal schedule in the middle of a pandemic, but there have been some changes that have been made.

The Tour schedule has remained largely unchanged in 2021, but with international travel still not advised, the WGC-Mexico Championship has relocated to The Concession Golf Club this week, taking on a new name, the WGC-Workday Championship.

If you think The Concession is an odd name for a golf club, you’re not alone. But the name actually comes from a historic moment at the 1969 Ryder Cup.

Coming to the final hole at Royal Birkdale that year, Jack Nicklaus was tied with 1969 Open champion Tony Jacklin in the deciding match. Whoever won the hole would win the Cup for their respective side.

Both men hit the green in regulation but missed their birdie putts. Nicklaus faced a slightly longer putt than Jacklin for his par, which he made, ensuring a half point and retention of the Cup for the Americans.

As he reached down into the cup to pick up his ball, Nicklaus grabbed Jacklin’s ball mark and conceded the putt, ending the Ryder Cup in a tie.

“I don’t know why but I very quickly thought about Tony Jacklin and what he had meant to British golf,” Nicklaus later said. “Here he was, the Open champion, the new hero, and all of a sudden it felt like if he missed this putt he would be criticized forever. This all went through my mind in a very, very quick period of time and I just made up my mind. I said, ‘I’m not going to give Tony Jacklin the opportunity to miss it. I think we walk off of here, shake hands and have a better relationship between the two golfing organizations is the right way to do it.’”

Nicklaus’ concession has been lauded in the years since as the ultimate act of sportsmanship and a prime example of what the game of golf represents.

The Concession Golf Club got its naming inspiration from that famous act, and it was designed by none other than Nicklaus and Jacklin, reminding everyone of that tremendous display of sportsmanship from 1969. Tour the Merion Golf Club men's locker room, one of the coolest spots in golf