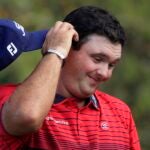 Patrick Reed was among the leaders confounded by the 13th green.

BRADENTON, Fla. — Viktor Hovland hit a perfect tee shot down the left side of the 13th fairway, leaving himself just 210 yards into the short par-5. Typically that would have a strong ball-striker like Hovland gunning for the pin.

This time, not so much.

“Oh, that was brutal,” Hovland said after his round, speaking of the pin position at No. 13. “I practiced that one a lot in the practice round to no avail today, but I mean, it’s such a hard shot. I’m standing there with a 6-iron in on the second shot and I looked at Shay [his caddie] and I was like, ‘There’s no point in even going for this pin, I’m just going to try to hit it in the front bunker.’ That’s about the only good spot you can have there.”

Birdies and big numbers. All week, that’s been the story at Concession Golf Club. And while early groups made plenty of hay at No. 13, the final groups struggled to keep the ball on the green at all as the surfaces began to dry out on Saturday afternoon.

Concession’s superintendent Terry Kennelly, who has been trying to convince the PGA Tour to speed up the greens and make the course even more challenging, appeared on Golf Channel Saturday morning and hinted at the devilish 13th.

“They’ve been begging for that front left pin,” he teased.

With soft greens and still conditions early in the day, players ate the hole up. But as things firmed up, No. 13 turned treacherous. Any ball more than five feet left of the pin rolled off into a collection area, and from that position there was no easy way back onto the putting surface without risking rolling over the far side.

Hovland, who hadn’t made a bogey in 23 holes (though he did record an eventful quadruple-bogey) found the front bunker and walked off with a five. He fared better than plenty of the players who followed. The final five pairings — the golfers playing the best golf of anyone in the field — played No. 13 in 10 over par. Four of those final ten players (Kevin Kisner, Patrick Reed, Tony Finau and Cameron Smith) made double-bogey, each taking at least two chips to get onto the green.

“Yeah, it’s an interesting one,” said Reed. He’d played his second shot into the front right bunker before splashing out to what appeared to be safety — until the ball kept trickling all the way off the edge of the green, back into the collection area.

“When I hit the bunker shot, I actually thought I left it a little short, because I felt like I spun it pretty good,” he said. “Next thing you know it just kind of skidded on me, trickled, goes off the back.”

Staring back up a slope, knowing he could easily end up back in the bunker he’d just come from, Reed could only shake his head.

“From there, it’s a lot of fun where you know if it gets five feet past the hole, it’s going off the green on the other side,” he said. “You feel like you hit three really good golf shots and you’re staring at a very, very hard fourth.”

He hit a chip that came back to his feet, then hit another onto the green and two-putted for double bogey.

The green’s slippery perception alone was enough to undo Collin Morikawa, who held a five-shot lead getting to 13 and actually found the middle of the green in three, leaving himself a 23-footer for birdie.

“I knew it was going to be a tough hole, but I did everything I wanted,” he said. Except then, through what he called “stupidity at his finest,” he left that putt six feet short, then missed again. Bogey.

When the dust settled Saturday, Morikawa retained the 54-hole lead by two strokes but played his final six holes (including No. 13) at two over.

Things went decidedly differently for Rory McIlroy. Playing in the sixth-to-last tee time of the day, McIlroy smoked his drive at No. 13, leaving just 195 yards. He pulled 7-iron and aimed short and right, but hit what he called “a professional pull” dead at the flagstick. His ball landed in the exact yard of turf it needed to hold the green.

“I got lucky,” he said. “I don’t know how that stayed where it did.” McIlroy poured in the 12-footer for eagle. The five groups behind him played the hole to a bogey average, which meant his eagle essentially picked up three shots on the leaders.

Big-time variability has made Concession compelling viewing all week long. “The golf course is very gettable if you’re playing really well, but there are some really hard pins out there and if you’re off by a little bit you can make some big numbers,” Hovland said.

“It’s not a walk in the park,” said Webb Simpson, who’s three shots back. “I think it’s a lot like TPC Sawgrass, where every day you’re going to have 65s and 75s.”

The lesson of 13 was this: at Concession, disaster lurks around every corner. No lead is safe. And when a chip comes rolling back to one of the contenders’ feet on Sunday, you might be extra-glad you’re watching from home.