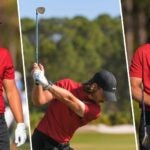 Cameron Champ and Tommy Fleetwood were among the players showing their support for Tiger Woods on Sunday at WGC-Workday.

BRADENTON, Fla. — It’s not the easiest color combination to pull off. Red and black? Together? It’s bold. It’s aggressive. And most PGA Tour players never even try it, for one simple reason: Those are Tiger Woods’ colors.

But on Sunday at Concession, in a nod to golf’s biggest name, players rocked Woods’ signature final-round colors as a sign of support. The 45-year-old was seriously injured in a single-vehicle crash in Los Angeles earlier this week and has been recovering in the hospital after a series of surgeries.

Jon Rahm was among the first to show up Sunday morning at the WGC-Workday rocking red and black.

Others including Marc Leishman and Cameron Smith, likely short on trouser options, wore red shirts with light pants. While the majority of golfers and attendees stuck to their typical scripting, a mix of caddies, volunteers, and spectators added to the smattering of scarlet across the course.

Nike outfitted its golfers in red and black, too. The first two to arrive at the course were Cameron Champ and Tommy Fleetwood, playing together in the 10:10 a.m. tee time. Champ opted for the traditional Nike polo while Fleetwood went with the mock-neck look that Woods won with at the 2019 Masters.

Rory McIlroy and Patrick Reed, paired together in the third-to-last group, each said that they would show up dressed in red and black. Collin Morikawa, the 54-hole leader, said he was planning to wear red and black in honor of his longtime golf hero, too.

There were other nods to Woods, too. Bryson DeChambeau, Matt Kuchar and Jason Day were among the Bridgestone players who put golf balls into play with “TIGER” stamped on the side. That’s the same stamping Woods uses in competition.

The nods to Woods came from other corners of the golf world, too. Annika Sorenstam was among the LPGA players rocking red and black at Lake Nona in the final round of the Gainbridge in Orlando.

Fred Couples added TIGER stamping to his golf ball at the Cologuard Classic.

And the maintenance staff at the opposite-field Puerto Rico Open showed up Sunday in full Woods gear, too.

Max Homa, who has idolized Woods since he began watching golf, posted to Twitter that while he admires Sunday’s sentiments, he ran into the very basic issue of not having packed a red shirt with his sponsor logos. Most players had already arrived in west Florida when news of Woods’ accident broke last Tuesday.

Homa, who received the Genesis Invitational trophy from Woods on Sunday in Los Angeles, was among the golfers who’d been thinking about Woods all week. He put it best before Wednesday’s first round:

“We can honor him by coming here to compete,” Homa said. “We’ll play a little golf, the kind that would make him proud.”