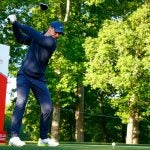 Rory McIlroy surged into contention at the 2021 Wells Fargo Championship on Friday.

After posting a sizzling 64 on Thursday to lead the field by two shots, Phil Mickelson struggled to a four-over 75 on Friday at Quail Hollow. Despite the setback, he’s still in the mix at three-under overall, only three shots behind co-leaders Matt Wallace, Gary Woodland and Patrick Rodgers, who are six-under.

Two-time Wells Fargo champion Rory McIlroy also made a move on Friday, signing for a five-under 66 — one of the best rounds of the day — launching him into contention by bringing his two-day total to four-under.

An exciting weekend of golf lies ahead. Here are three things you need to know after Friday’s second round of the Wells Fargo Championship at Quail Hollow in Charlotte, N.C.

Matt Wallace, Gary Woodland and Patrick Rodgers share a one-shot lead at six under par at the tournament’s halfway point. Rodgers and Wallace are still seeking their maiden PGA Tour victories, though Wallace has four international wins on his resume. Woodland has won four times on the PGA Tour, including the 2019 U.S. Open at Pebble Beach.

Lurking just behind the leaders is a bevy of big-name players. Rory McIlroy made a statement on Friday, firing a five-under 66 to charge 68 spots up the leaderboard into T5. A win this week would mark McIlroy’s third at Quail Hollow.

One shot behind McIlroy and three shots behind the leaders is 50-year-old Phil Mickelson, who dazzled the gallery with a first-round 64 on Thursday. Though he fell back with a second-round 75 on Friday, he’s still right in the mix at three-under overall heading into the weekend.

“I’m excited to be in contention heading into the weekend, and I know I’m playing well,” Mickelson said after his round. “So that will be a big thing for me is just to be present on each shot because I threw two shots away on 15 and two on 17 and that ultimately, you know, things I’ve been doing and I just can’t keep doing that. And I’m optimistic for the weekend, though.”

Notables to miss the cut