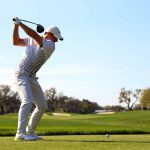 Rory McIlroy has spoken out against the proposed super league.

A year ago at this time, or maybe more like 13 months ago, people were worried about whether the worldwide distribution of food and medicine would be fatally disrupted by a pathogen we knew almost nothing about.

And now look at us: it’s a Friday in May and Phil Mickelson is contending at Quail Hollow, the Walker Cup is being played at Seminole and you have a weekend tee time at a course that is not only open, there are likely rakes in the traps.

You likely have seen that phone snap making the rounds on Insta, DJ at his neighborhood Starbucks, sipping a venti and writing in a composition book marked My Gratitude Journal. No, there is no such snap. Yes, there is such a sentiment. We can say that because there has to be. From where we were then to where we are now? We have witnessed the awesome collective power of science, competition, intelligence and banking, and a lot of other things. And still the pain and suffering was incalculably vast.

Now there’s a lot of banter about a new star-driven, funny-money international golf league, one that could begin next year and threaten the World Golf Order as we know it. If this super-league golf tour (lowercase t) gets off the ground, it will be a triumph of really one thing: the lure of money. That’s OK. In a capitalist system, the lure of money makes the world go ‘round.

I cannot imagine being interested in a league where four-man teams play golf against three other four-man teams, for a team title and an individual title. That sounds like an exhibition, like entertainment. The draw of professional golf for me is the camaraderie of the players, their respect for the rules, their talent and their competitiveness. I can’t imagine finding that in a 16-man field of rich-getting-richer players. Where’s chasing the dream in any of that?

But the point I’m trying to make here is that, regardless of whether that kind of thing appeals to you, the timing is poor, to say the least. Isn’t this about the right time to be saying let’s be grateful for what we have? In golf and way beyond it.

Jay Monahan has his hands full here. If he’s in a war room right now, plotting how to handle this thing, who is he actually at war with? There’s no public face to this upstart golf league.

What he seems to know is the other side has vast reserves of cash, the kind of money that makes the Tour’s ill-advised $40 million PIP bonus payout scheme look like chump change. Money almost always wins out, so if this becomes all about money, players will walk and this new league will get launched.

But there’s something else people crave too, in addition to money, and that’s status within their peer group. Money can’t buy that.

A professional golfer gets some status by playing in a Masters. Contending gets you more. Winning gets you more yet. Winning multiple times gets you even more. And it’s not, of course, just the Masters. It’s the Ryder Cup, the other majors and all those minors. And then the question becomes, well how did the Masters become the Masters in the first place? Who are your forebears? And how did you get here in the first place? It’s a tall task, to get the players to realize they are part of a continuum, and the deep satisfaction that can come from that. The culture of golf is the continuum. Handing the game down. Improving it while it’s in your grasp.

So that’s Monahan’s best chance and it’s not much of one: try to show the players, on an individual basis, that they are part of a tradition that is bigger than themselves. Yes, get-it-while-you can is in our DNA. But that doesn’t mean it has to carry the day.

The kids playing in the Walker Cup this weekend know that Phil Mickelson was once a Walker Cupper, too. That he’s won the Masters and everything else there is to win, pretty much. That he’s 50 and he’s playing his bottom off at Quail Hollow in Charlotte. And each one of them is surely saying the same thing, to themselves and maybe to one another: Man, I hope someday that can be me!

Suzy Whaley's long been a trailblazer in the sport. She's not slowing down