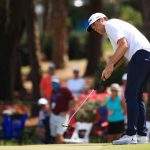 The 2021 Valspar Championship is already at the halfway point, and continues on Saturday, May 1, at Innisbrook Resort’s difficult Copperhead course. You can find full third round tee times at the bottom of this post.

Notable pairings for Valspar Championship Round 3

Keegan Bradley remains in the lead after following up his opening-round 64 with a five-under 66, but an epic charge from Sam Burns, who shot a sizzling eight-under 63 on Friday, means Bradley must share the top spot on the leaderboard at 12-under overall.

Like Bradley on Thursday, Burns was bogey-free on Friday, carding eight total birdies and no bogeys. The 24-year-old is seeking his first PGA Tour victory, while Bradley is seeking his fifth. The two share a four-shot advantage over the rest of the field and will tee off in Saturday’s final pairing at 2:05 p.m. ET.

Once you get past the two front-runners, the leaderboard is tightly packed. Three players are tied for third at eight-under overall: Lucas Glover, Max Homa and Charley Hoffman. Five players are tied for sixth, at seven-under, and four more are tied for 11th at six-under. Homa and Glover will play in the penultimate pairing at 1:55 p.m. ET, and Hoffman will play alongside Charl Schwartzel at 1:45 p.m. ET.

Tournament favorites Dustin Johnson and Justin Thomas are three-under and two-under, respectively. Johnson will start the third round at 11 a.m. ET on Saturday with Jhonattan Vegas while Thomas will play alongside Ryan Palmer at 10:20 a.m. ET.

Other notable pairings include Abraham Ancer and Bubba Watson at 12:25 p.m. ET, Henrik Stenson and Jason Dufner at 8:25 a.m. ET, and Viktor Hovland and Henrik Norlander at 11:50 a.m. ET.

Check out the full third round tee times for the 2021 Valspar Championship below.

How to bet on the Valspar Championship — risk-free!

Check out our GOLF-branded gear