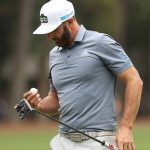 A first for DJ

The putter has been a bugaboo for much of Dustin Johnson’s career. Blades and mallets have been rotated in and out over the years with varying degrees of success. TaylorMade’s Spider Tour has enjoyed the longest run in Johnson’s bag, but as we learned at the RBC Heritage, even the mallet can get a quick hook.

Johnson chose to swap the Spider for a winged TP Bandon 1 Prototype putter during the final round — only this wasn’t a standard exchange. Following Tommy Fleetwood’s lead (more on that in a moment), Johnson went with a new putter head and shaft.

Johnson has never used a multi-material putter shaft during his career, which made the change even more intriguing. After testing the putter on Wednesday, Johnson received a final build on Saturday and practiced with it leading up to the final round.

“I feel like I haven’t putted really well for the last few weeks, so that’s kind of really why I’ve just been struggling with my putter,” Johnson said. “I kept with it, kept practicing, kept grinding, but it wasn’t really getting any better, so sometimes it’s just time for a change.”

The rise of multi-material putter shafts on Tour can be attributed to Bryson DeChambeau’s success with an LA Golf prototype in his Sik putter. Since DeChambeau employed the shaft, other high-profile names have followed suit, including Rickie Fowler, Tommy Fleetwood and Kevin Na.

The genesis behind the design is adding stability to the putter head without significantly increasing weight. For Johnson, he saw near-immediate benefits with the new putter and shaft, gaining more than three strokes on the field on the greens during the final round.

“It felt good,” said Johnson, who ranked 8th in SG: Putting for the week. “It would have made a few more I feel like, just a little more speed. The first day using it, I just got it in yesterday, so rolled a few on the putting green. I really like it. It’s got a different shaft in it and a different head but rolled good. We’re going to keep it up.”

Expect to see Johnson and his new putter when he tees it up in two weeks at the Valspar Championship.

Tommy Fleetwood failed to make the weekend in Hilton Head, but he still departed with positives. Like Johnson, a cold putter led Fleetwood to try a TaylorMade TP Bandon 1 prototype with an LA Golf TPZ 135 shaft.

After opening with 76 and losing more than two strokes to the field with the putter, Fleetwood nearly made up the deficit (plus-1.78) during a second-round 65 that featured six birdies.

Along with the putter change, Fleetwood adjusted the rest of this setup following the Masters, replacing his 10.5-degree SIM2 driver and 13.5-degree 3-wood — designed specifically to execute draws around Augusta National — with 9- and 15-degree heads. A course-dependent P7TF 3-iron also replaced his SIM2 7-wood for the week.

Matt Wallace and Patrick Cantlay added new Odyssey putters to the bag in the hopes of finding a spark on the greens. Wallace, who finished T18, opted for the 2-Ball Ten that took the Tour by storm earlier this season.

Cantlay, a traditionalist when it comes to the putter, chose to go with a White Hot OG 2-Ball mallet and SuperStroke Flatso 1.0 grip for extra stability.

Will Zalatoris’ success with an Odyssey White Hot Pro #7 arm-lock putter had players talking in Hilton Head. More than a handful requested arm-lock putters to test — it was a hot topic of conversation in the media center — early in the week.

While it wasn’t a new build for Kevin Kisner — the putter was originally made for him several years ago — the RBC Heritage marked his first start using an Odyssey StrokeLab Black #7 Arm Lock putter. The putter featured a sideways SuperStroke Flatso 17 grip that rested against his forearm.