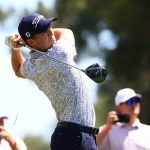 Justin Thomas opened with a round of two-under at the 2021 Valspar Championship.

The 2021 Valspar Championship continues on Friday, April 30, at Innisbrook Resort’s difficult Copperhead course. You can find full second round tee times at the bottom of this post.

Notable groupings for Valspar Championship Round 2

Keegan Bradley is leading the charge after firing an opening round of seven-under 64. The 34-year-old made it look easy on Thursday, carding seven birdies and zero bogeys. Bradley is seeking his fifth career Tour title this week. He’ll play the second round alongside his Thursday companions, Keith Mitchell and Wesley Bryan, at 1:00 p.m. ET.

Two shots behind Bradley is a logjam of players tied for second: Emiliano Grillo, Ryan Moore, Hank Leboida, Max Homa and Patton Kizzire are all five under par. Tournament favorites Dustin Johnson and Justin Thomas are even par and two-under, respectively, and will start the second round at 8:01 a.m. ET on Friday with Joaquin Niemann.

Check out the full second round tee times for the 2021 Valspar Championship below.

How to bet on the Valspar Championship — risk-free!

Check out our GOLF-branded gear