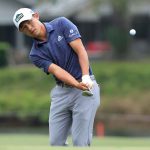 Collin Morikawa is three shots back after the first round of the 2021 RBC Heritage.

The 2021 RBC Heritage at Harbour Town Golf Links continues on Friday, April 16. You can find full second round tee times at the bottom of this post.

Notable groupings for RBC Heritage Round 2

Aussie Cameron Smith is on a run of good form. The 27-year-old just finished T10 at the Masters, and hasn’t finished worse than T28 since January. And on Thursday in Hilton Head, Smith fired a sizzling bogey-free round of 62 — nine under par! — to lead the field by one shot.

Smith is seeking his third career Tour victory and will play the second round bright and early at 7:55 a.m. ET on Friday, alongside Tyler Duncan and Sebastian Munoz.

At eight under par overall, Stewart Cink is only one shot behind Smith. The 47-year-old is also coming off a nice finish at Augusta, where he was T12. Cink has seven Tour victories on his resume, the most recent of which was the Safeway Open in September.

Cink will tee off on Friday afternoon at 12:23 p.m. ET alongside Andrew Landry and Satoshi Kodaira.