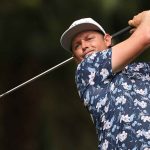 The leader, ahead of this week’s RBC Heritage, walked over to one of Harbour Town Golf Links’ many ponds and fished. He caught just three oysters. “We were actually out there for about 45 minutes and then security came out and escorted us off. I tried my best to stay out there. I’m addicted to fishing. But I just thought it was best to just leave,” he said. The fish might not have been biting. But the birdies were. Here are three things you need to know after Thursday’s first round in Hilton Head, S.C.

Cameron Smith birdied nine holes. And he had as many bogeys as he had fish.

“Yeah, I just played really solidly,” Smith said. “I hit lots of irons close, and when I missed one, I missed it in the right spots. Not a lot of stress out there, which is nice.”

Collin Morikawa is three shots back

Cink led for most of the day after his early eight-under 63. He hit his opening tee shot in the water, bogeyed the hole, then peeled off seven birdies and an eagle.

“It was probably one of the worst opening drives I ever hit in my life,” Cink said. “You’d think that’s a bad way to start, but in a way, it’s a wake-up call. After playing in the Masters and being super focused and intense, to come here and be lazy on the first shot was kind of like a slap in the face and it got my attention.”

Morikawa made seven birdies and Wallace six in their rounds of 65. On 18, Morikawa rolled in a 20-footer for his final birdie.

“I think overall it was probably one of the best rounds I’ve played all year,” he said. “It’s surprising to say … but from tee to green and even on the putting, I didn’t make many mistakes and got away with a little heavy shot on 18 and was able to capitalize on some birdies.”

Dustin Johnson is eight shots back

Among other players, world No. 1 Dustin Johnson shot a one-under 70 and is eight strokes out of the lead; Will Zalatoris, who finished second at last week’s Masters, shot a three-under 68; and defending champion Webb Simpson shot an even-par 72.