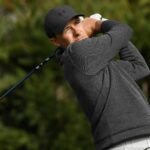 Jordan Spieth is in the field at the 2021 Genesis Invitational.

The 2021 Genesis Invitational at Riviera Country Club begins on Thursday, February 18. You can find full first round tee times at the bottom of this post.

Notable groupings for Genesis Invitational Round 1

It’s been a long time since Jordan Spieth entered the winner’s circle, since the 2017 Open Championship in fact. But after years of swing struggles, the three-time major champion is finally turning it around. Spieth contended for the title at his last two events, the Waste Management Phoenix Open and the AT&T Pebble Beach Pro-Am, eventually finishing T4 and T3, respectively.

Spieth has another chance this week, and it all begins with Thursday’s opening round. He tees off at 3:05 p.m. ET and will play alongside Sebastián Muñoz and Matt Kuchar, the player Spieth overcame to win the 2017 Open. But the competition at Riviera CC will be fierce. Eight of the Top 10 players in the world are teeing it up this week, including World No. 1 Dustin Johnson, who starts his first round at 10:24 a.m. ET with Bubba Watson and defending champion Adam Scott.

Check out the full first round tee times for the 2021 Genesis Invitational below.