Tour Confidential: How close is Jordan Spieth to breaking through? 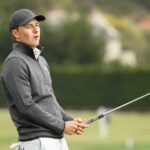 Jordan Spieth shot a 2-under 70 on Sunday to finish tied for third.

Check in every week for the unfiltered opinions of our writers and editors as they break down the hottest topics in the sport, and join the conversation by tweeting us @golf_com. This week, we discuss another week on The Spieth Show, rangefinders in pro golf, creative tee boxes at Pebble Beach and more.

For the second consecutive week, the Jordan Spieth Comeback Tour gave golf fans a thrill. A week after contending at the Waste Management, Spieth took his rejuvenated game to the AT&T Pebble Beach Pro-Am, where after 54 holes he led by two. But as was the case in Scottsdale, Spieth cooled off in the fourth round at Pebble, shooting a two-under 70 to finish in a tie for third, three back of Daniel Berger. What did you learn about Spieth’s game this week that you didn’t know last week?

Sean Zak, senior editor (@sean_zak): It would appear his irons game is indeed sharp as hell, which you can win with. Just ask Adam Scott. And if Spieth had driven the ball any better on Sunday, he might have won this week. He continues to look more and more like his 2017 self — very good, but not as good as 2015 — which is a great step back.

Michael Bamberger, senior writer: I think we relearned something: that 72 holes is WAY different from 54 or 73 or 71. But as Tiger used to say, when you’re learning something new, you take baby steps. Jordan’s taking baby steps. Watch out, April.

Dylan Dethier, senior writer (@dylan_dethier): The nice thing about this week was that Spieth told us the truth. No need to read between the lines. “Man, for whatever reason it’s never freakin’ easy,” he said on Saturday. That about sums it up. He’s not making golf look easy, but he’s hitting his irons well and competing like crazy and really playing golf.

Alan Bastable, executive editor (@alan_bastable): [whispers] Um … maybe he’s not quite all the way back? Watching Spieth’s revival has been a joy, but he’s still hitting too many loose shots to close out tournaments. Spieth himself said he’s toting around his “B game.” Man, watch out world if he finds his A game.

For all the positives in Spieth’s recent starts, he hasn’t been able to close. What’s most keeping him from picking up his 12th PGA Tour title?

Zak: Eh, the difference between winning and just contending can be as simple as luck. But Tony Finau truthers would tell you it’s hitting big shots in big moments (and avoiding the bad shots in big moments), just like Berger did Sunday. Spieth has two straight weeks of not hitting the big shots on Sunday, but that’s fine right now. People have spent entire careers in that space. I think he’ll figure it out soon.

Bamberger: Stands over the driver not knowing. I can feel the pain from here. Can’t get the uphill birdie putts to the front door. He’s still tight. It will come.

Dethier: He’s one big Sunday round away. He’s a few big shots in big moments away. This is far too simple, but on Sunday Daniel Berger made his round of 65 look easy and Jordan Spieth made his round of 70 look like hard work. Spieth needs to play some easier golf.

Bastable: Yep, he sure doesn’t make it easy on himself. He never really did, even when he was winning majors, but the last couple of weeks have been an absolute high-wire act. That Sunday 70 could have easily been a 75. He hit just six fairways and a couple of his greens in reg were herculean efforts from dastardly lies. One other must-do if he wants to close out tournaments: Never. Question. Greller.

Berger, who is 27, prevailed thanks in part to a dramatic eagle 3 on Pebble Beach’s iconic par-5 18th, making him one of five players to have multiple wins since the Tour’s restart in May (he joins Dustin Johnson, Jon Rahm, Collin Morikawa and Bryson DeChambeau). In terms of overall potential, where do you rank Berger among the Tour’s crop of twentysomethings?

Zak: I’ll put him just behind Xander Schauffele. And narrowly. Which probably means he’s like 7th or 8th among that twentysomethings crop. That’s still damn good. Win a bigger event — which he will — and people will start to talk differently, too.

Bamberger: He doesn’t look like one of the rising stars in their 20s. His swing, body type and demeanor give you the impression he’s not going to bring it again and again, like a Jon Rahm  BUT the results are the results. To play 18 in 10 shots on the weekend was outstanding. He can lean on that for some time to come: I was down, but not out.

Dethier: There are six guys I think belong ahead of Berger: Jon Rahm, Justin Thomas, Xander Schauffele, Collin Morikawa, Patrick Cantlay and Bryson DeChambeau. And a couple of those are negotiable. That 18th hole was incredible.

Bastable: Need to see more out of him in the majors before making any sweeping declarations (just two top-10s in 18 starts), but I’m very excited to see him at Whistling in the Ryder Cup this year. At the 2017 Presidents Cup, Berger struck me as an excellent team guy — when not playing, he was flying all over Liberty urging on his teammates.

Two players at Pebble — Maverick McNealy in the third round and Russell Knox in the fourth — were penalized under Rule 9-4 for inadvertently moving their balls as they addressed them. Under the 2019 rules update, players are no longer penalized if they are deemed to have unintentionally moved their balls on the green. Should that rule be extended to exonerate players who do the same through the green?

Zak: I used to struggle with this one, thinking that players shouldn’t place or ground their club so close to the ball, but Russell Knox’s ball moved from within the fairway, where we should be able to expect our ball to stay in place before we act on it. If golf balls move at all while the player is nearby, replace them. No penalty. That avoids all the confusion.

Bamberger: Very tough. Play the ball as it lies is a central tenet. If you cause the ball to move, it’s a shot. Yet these micromovements have no impact on anything. But when does a micromovement turn into actual movement? I play often on a course with zoysia fairways. That ball can fall off its perch in the takeaway. It’s a shot. Should it be? I don’t know, but it is. When in doubt, hover. At least for now.

Dethier: Complete and total exoneration! There should be more leeway in this rule. A player shouldn’t be able to improve his or her lie, but if it inadvertently moves, move it back, free of charge.

Bastable: Disagree. On the greens, I get it. When the surfaces are slicker than bowling alleys, a player should not be penalized for a ball’s sudden and unexpected movement. But on the rest of the course, it’s rarely a natural force (like wind or a shifting sprig of poa) that sets a ball in motion — it’s a club swipe, a footprint, some kind of human action. Proceed with extreme care, golfers, and you shall avoid infractions! With the goal of improving “flow of play,” the PGA of America will permit the use of rangefinders in its three biggest events in 2021 (the PGA Championship, KPMG Women’s PGA Championship and KitchenAid Senior PGA Championship). In keeping with Rule 4.3a (1), players and caddies will be allowed to use devices that report only distance and direction (but not elevation changes, wind speed or other data). Good move?

Zak: It’s a bored move. As many Tour caddies pointed out this week — one of them for GOLF.com — there are so many things that the player and caddie measure before every shot that pulling out a rangefinder to get the singular yardage to the hole will not provide much benefit at all. It could very well slow down pace with certain players. The yardage books are just so jam-packed with info that it’s all right there. This truly doesn’t mean much for them, but it could add sponsorships to their portfolio and will probably lead to more sales for Garmin and Bushnell.

Bamberger: It’s too much. You want to allow rangefinders AND have players pace off fixed markers? It will slow play, not speed it up. If you bring in rangefinders, don’t allow the pacing. In recreational golf, that’s how it works. Nobody does both. Since the PGA of America is taking its lead from ordinary golfers here, might as well go all in or not at all.

Dethier: I’m having a hard time summoning any sort of hot take for this one. I could see Brooks Koepka shooting the number to the pin, grabbing a club and firing away. But I could see certain other pokish players hemming and hawing while they play around with their laser and pace numbers to different parts of the green, too. I think it’s fine, overall. But I don’t think it will change much — and I think the Tour is still a little ways away from adopting this, anyway.

Bastable: This really isn’t a big deal. If loopers are still unsure about a yardage after shooting it (which takes all of about 6-8 seconds), they’re still gonna go through their normal paces to make sure they get it right in their minds; in other words, I don’t see it saving much time, or adding much, either. And for purists who think it desecrates the game, I ain’t buying it. Rangefinders will be in play at every pro event (save perhaps the Masters) within three years.

In an exciting twist at the AT&T, the Tour sent players off a little-used tee box on the 10th hole that made the par-4 nearly drivable while also bringing more of the coastline into play on the tee shot. If you were tasked with setting up Pebble and could shake up one other hole setup to keep the players on their toes, what would you do?

Zak: No. 2 needs to be a par 4, like it is during the U.S. Open. Shorten it if you have to! Make 11 drivable, too. Move the tee box to the left and closer to the hole. Shots that bound up onto the green could roll up to that steep back edge of the green and perhaps entertain a par-4 ace.

Bamberger: Good calls, young Zak. You could move up the tee on 16 and make it close-to-drivable, too.

Dethier: This might qualify as a “big change,” but it seems a shame that the money holes are 6-7-8 when those could just as easily fall in a more climactic bit of the round. If you were re-routing Pebble, you’d make that three-hole stretch 12-13-14, take two holes to connect back to the 17th tee and finish on the fantastic 18th. What a back nine that would be!

Bastable: Back up the tee at 7 (there’s a little spit of land short and right of the 6th green that would allow you to do it — h/t to Twitter user Michael Lord, who actually mapped this out). Love to see the guys’ reactions as they pull up to the 7th expecting a little flip wedge only to encounter 180 into a blind green.