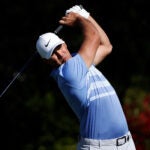 Brooks Koepka during last Sunday's final round of the Waste Management Phoenix Open.

Brooks Koepka was just under 100 feet away from the hole for his second shot on the par-4 17th at TPC Scottsdale. He pitched it, the ball bounced just short of the green, it bounced a few more times, then rolled toward the hole. Before it reached the cup, Koepka raised his club into the air with his left hand. His ball crawled in for the eagle 2. He now had the lead during last Sunday’s final round of the Waste Management Phoenix Open.

“Lands it right on the apron, right where he wanted to, read it perfectly — wow,” analyst David Feherty said during the NBC broadcast.

“No, that was just dumb luck that it went in,” Koepka said this week on Barstool’s Pardon My Take podcast. “That was just real dumb luck.”

Lucky. And good. About halfway between Koepka’s ball and the hole were three sprinkler heads, and he said he wanted to aim right of those. He did. But his ball skipped back on the line toward the hole. Koepka was looking for a birdie. He found an eagle.

“When I went up to the green to go look at it, I was like, ‘Oh, if I land this right on line with the sprinkler heads, that’s where I want to land it. I’d have myself a 6-, 8-footer if I hit a good shot,” Koepka said on the podcast. “But because they were right there, I had to go a little further right, and then the ball kind of took a weird little hop, and to be honest with you, it shouldn’t have gone in. That’s just stupid luck, man.”

The chip-in moved Koepka into the lead, and he’d hold on for his eighth win on the PGA Tour, but first since the World Golf Championships-FedEx St. Jude Invitational in July of 2019. In between then and Sunday, his play had been hindered by various left knee ailments that made the four-time major champion question “whether I was even going to be somewhat remotely the same golfer that I ever was.”

Then his ball bounced.

“Yeah, I mean that’s golf,” Koepka said on the podcast of his chip-in. “Half the time a guy hits a bad shot and it goes close to the hole, it’s like, ‘I wasn’t really aiming there, but all right, it is what it is.’”