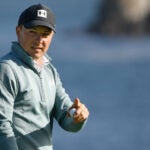 Jordan Spieth during Saturday's third round of the AT&T Pebble Beach Pro-Am.

Jordan Spieth held his putter, first in his right hand on Saturday as he crossed a bridge toward the green on the 403-yard, par-4 16th hole at Pebble Beach, then in his left hand as he got closer. He leaned on his putter, too, to pick his ball out of the cup.

Spieth just never putted with his putter on the hole.

“He just took his putter to keep him company,” analyst Nick Faldo said on CBS’ broadcast of the third round of the AT&T Pebble Beach Pro-Am.

Force of habit. On Spieth’s second shot, after a drive down the left side of the fairway, from 160 yards out, Spieth holed out. He hit a draw into the hole, his ball bounced once, and it rolled in for an eagle two.

At the moment, crazy good. On Thursday, on the par-4 10th, Spieth spun his second shot back into the hole from 110 yards out. Two holes, two eagles, four-under par. He needed both. Spieth had entered Saturday’s third round with a one-shot lead, bogeyed 10, 12 and 14, then jumped into a tie at the top with Daniel Berger after 16. Berger then double-bogeyed 18, and Spieth will enter Sunday with a two-shot lead over Berger and four other players.

Spieth, after his hole-out on Saturday, raised both hands in the air, then pumped his right fist, slapped hands with his caddie, Michael Greller, and dropped his club back in the bag. He’s now 18 holes away from his first win since the 2017 Open Championship.

“This game will drive you crazy, and when you hit a shot like that, you’re like, all is forgiven,” Nobilo said.

Spieth is good with crazy, thank you very much. From 2013 to 2017, he won 11 times on the PGA Tour and twice internationally, including three majors. He spent 26 weeks as the world’s No. 1 player. Spieth’s now 69th. He hasn’t won since the 2017 Open Championship. He and everyone else has tried to figure out why.

Then last week, more crazy. He shot a 67 to open the Waste Management Phoenix Open. He shot another 67. He didn’t shoot 67 in the third round. He went six better. Ten birdies, no bogeys and a career-low-tying 10-under 61. He was tied for the lead with 18 to go. He then stumbled to a one-over 72 and tied for fourth, two strokes behind Brooks Koepka.

Will this Sunday be different? Did Spieth learn anything from last Sunday? Has he learned enough about his revamped swing to play like he did on all those previous Sundays?

“I think a little bit — and today I learned a lot from, too — just how much of a roller coaster things can be,” Spieth said. “And this was something that I needed to learn to win. At the end of 2014, I went through this where you just have to look at each round as almost a marathon, these final rounds when you’re in contention Sometimes those first couple rounds you get in a nice groove pretty easily and you’re just trying to shoot up the board, but you need to set a goal in the final round understanding that Daniel could go five under on the first six holes out here and you can’t let that faze you because things can change so quickly especially on a golf course like this and the conditions that we have.

“So I think it’s just kind of being massively patient. I just wasn’t patient enough last week, tried to force a little bit early and ended up not taking advantage of some easy holes that towards the end would have been really nice to have those couple shots. So, yeah, I think quite a bit that I can take off of last week, but also from today and how quickly things change.”