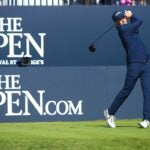 Jordan Spieth is looking for his second Open Championship title.

The final men’s major of 2021 has arrived, as the game’s best tee off at Royal St. George’s for the 149th Open Championship. Hideki Matsuyama, Phil Mickelson and Jon Rahm have already won majors this season, but who will claim the final one?

Tee times for the opening round at Royal St. George’s begin at 1:35 a.m. ET on Thursday with the final group off at 11:16 a.m. You can follow all of the action with our live blog below, which we’ll update throughout the first round.

Refresh this page often for the latest updates from the 2021 Open Championship. The newest items will be at the top.

Local favorite Tommy Fleetwood birdied his final hole to reach three under on the day, three behind Oosthuizen and currently T9.

Schauffele and Fowler posted rounds of one-under 69 to sit five shots off the lead, currently T32.

A birdie on the par-3 16th brings Webb Simpson to four under on the day and two shots off the lead with two holes to play.

Webb Simpson has played himself into the mix, with four birdies in 14 holes. He’s three under on the day — three shots off the lead — with four holes remaining in his opening round.

It’s hard to believe that World No. 4 and 2020 PGA champion Collin Morikawa has never played in an Open Championship until now, but the young star made an excellent debut, posting a round of three-under 67, which is currently T8, three shots back.

Frenchman Benjamin Hebert birdied the par-4 14th to reach four under on the day — two shot behind Oosthuizen’s lead.

After suffering back-to-back bogeys on Nos. 5 and 6, Rory McIlroy tumbled down the leaderboard to T73, one over on the day.

Tony Finau is only four shots back after carding back-to-back birdies on Nos. 13 and 14. He’s now two under on the day with three holes left to play in his first round.

Keith Mitchell birdied the par-3 11th to continue a bogey-free run. He’s currently three under par, and three shots off Louis Oozthuizen’s lead with seven holes left to play in the first round.

Thomas birdied the par-4 4th hole to get to one-under on the day, which is currently T29.

Rory McIlroy is on the course at the 149th Open Championship. McIlroy, a four-time major winner, has not won in a major since 2014, although he did contend last month at the U.S. Open. Will this be the week the drought ends?

Louis Oosthuizen is now the outright leader at Royal St. George’s. Oosthuizen shot a bogey-free 64 on Thursday, making six birdies on his way to the solo lead. The 2010 Champion Golfer of the Year has finished runner-up in the last two majors, and he has six major runner-up finishes in his career. He’ll look to break that trend this weekend.

Jordan Spieth finished his day with pars at 17 and 18 to shoot 65, and he is currently the leader in the clubhouse. Spieth’s round featured six birdies and just one bogey as he tied his career-low round at the Open Championship.

Jordan Spieth and Louis Oosthuizen have found themselves tied for the lead early on Day 1 of the Open Championship. Spieth birdied the 16th to get to five under, and soon after Oosthuizen birdied 13 and 14 to tie him at five under.

Mackenzie Hughes added another birdie on 12, and still without a bogey he leads the 149th Open Championship at five under after 13 holes. Harman is alone in second at four under and eight others are tied for 3rd at three under, a group that includes Jordan Spieth and Louis Oosthuizen.

Canadian Mackenzie Hughes, aided by birdies on 4, 5 and 6, has tied Harman for the lead of four under with a birdie on 10.

Andy Sullivan, Justin Harding and Danny Willett are all at three under and in the clubhouse.

Jon Rahm, however, ran into trouble on 10. He was even up until then but found trouble in a pot bunker and made double bogey to drop to two over and into a tie for 70th. DeChambeau also sits at two over.

Brian Harman just bogeyed the 9th, his first of the day, to make the turn in four-under 31 and lead by one. A handful of players are tied at three under, among them Jordan Spieth, who just saved par on 9 for a three-under 32 on the front.

Meanwhile, one of Spieth’s playing partners, Bryson DeChambeau, signed for a two-over 37. DeChambeau bogeyed 8 and 9 to close out the front.

Other notables: Viktor Hovland (thru 15) is in the group of players at three under, Brooks Koepka (thru 14) and Dustin Johnson (thru six) are both two under, and Justin Rose (thru six), Lee Westwood (thru six), Joel Dahmen (thru 13) and Abraham Ancer (thru 14) are all one under.

Brian Harman still leads at four under through six holes, but Andy Sullivan has officially grabbed the clubhouse lead with a three-under 67.

Meanwhile, Jordan Spieth is among the surging players as golf fans in the States begin to wake up and start their Thursdays.

Spieth was one over through four holes, but he’s now added FOUR straight birdies on 5, 6, 7 and 8 to get to three under.

Harman started the day with three straight birdies, made par on 4, but then went right back to adding to his lead on 5. He missed the fairway but still stuck his approach to just a couple of feet and kicked in his birdie. He’s two clear at four under through five.

Brian Harman opened the 20201 Open Championship with birdies on 1, 2 and 3, and just like that he’s three under through four holes and on top of the leaderboard as of 5:30 a.m. ET.

Andy Sullivan, Viktor Hovland, Paul Casey and Joel Dahmen are all tied at two under. Sullivan has just two holes left so is in line to take the clubhouse lead.

The Open Championship has a way of figuring things out. That’s one of the reasons it’s so refreshing to turn our collective golf attention across the pond every summer. The petty grievances that often surround American tournaments seem to disperse in the sea mist. Course not green? Good! Rough’s not even? Great! Things aren’t “fair”? Perfect!

The Open seems to find simple solutions to issues that confound the rest of the golfing world. Look no further than its drop zones.

Royal St. George’s looks very much like it did when it hosted 19th-century Opens, but one main visual difference is the massive navy grandstands overlooking some greens. On the PGA Tour, this is a frequent point of consternation. Grandstanding, grandstopping, backboarding — the phenomenon has many names, but it’s what happens when players send approach shots into the bleachers and receive the dastardly punishment of…a free drop on a cushy lie.

The Open has taken a decidedly different approach.

Bryson DeChambeau pulls back curtain on how celebrity, controversy affect him

Bryson DeChambeau is stuck on a carousel and he can’t get off.

I have spent time in a large number of DeChambeau’s press conferences. I have not quite seen one like what he delivered on Tuesday at Royal St. George’s. My big-picture takeaway was this: Bryson DeChambeau would like everything to just stop for a second.

He’s in a beef with Brooks Koepka of which he wants no part. He’s had a public breakup with his caddie which he’d prefer stay private. He likes being one of golf’s more popular figures but has less interest in being one of the game’s most controversial. And when the scrutiny starts coming from all corners at once?

Listen closely and you can hear DeChambeau trying to stamp down new mini-controversies as they arise. At the U.S. Open, some viewers criticized him for not yelling “Fore” when he launched a tee shot into the crowd at Torrey Pines’ fourth hole. On Tuesday, a reporter asked why he doesn’t shout to crowds.

“I do shout fore,” DeChambeau objected. “I don’t know what you’re talking about. There are plenty of people on the tee box that do shout fore. You’re bringing up a very controversial thing, which is unfortunate, but 99 percent of the time I do, and unfortunately people think I don’t. But that’s okay, they can say whatever they want.”

At the risk of repeating myself, and recognizing that my rooting interests and my gambling interests unwisely and often overlap, I have a dark(ish) horse for this week’s British Open: Mr. Lucas Glover.

Yes, close readers with long memories (two months is long these days) may recall that in May I was on the verge of touting Glover, in the days leading up to the PGA Championship, as a dark-horse pick. Then I learned of one significant problem: Glover was not in the field.

Glover, winner of the 2009 U.S. Open, was not in this year’s U.S. Open at Torrey Pines, either. But he is in this week’s British Open at Royal St. George’s. He was in, and planning to play, even if he hadn’t won last week’s event, the John Deere Classic, which he did do. It was on TV.

Sunday night, Glover took a charter flight, with other touring pros, from Moline, Ill., to merry old England. Lucas and his “team.” Which is to say Lucas. His longtime caddie, Don Cooper, couldn’t make the trip. His passport had expired. Lucas is not traveling with his family or his agent or, to use the words he used in his post-victory press conference, “a gentleman named Ward Jarvis.”

A reporter had asked Glover about his putting routine, and this (with minor editing) is what Glover said that night:

“I started working with a gentleman named Ward Jarvis, who works with several other guys out here. I started with him right around Puerto Rico this year and we developed a couple of things that I do every time, no matter what.