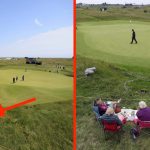 The Open Championship possesses the world's most diabolical drop zones.

The Open Championship has a way of figuring things out.

That’s one of the reasons it’s so refreshing to turn our collective golf attention across the pond every summer. The petty grievances that often surround American tournaments seem to disperse in the sea mist. Course not green? Good! Rough’s not even? Great! Things aren’t “fair”? Perfect!

The Open seems to find simple solutions to issues that confound the rest of the golfing world. Look no further than its drop zones.

Royal St. George’s looks very much like it did when it hosted 19th-century Opens, but one main visual difference is the massive navy grandstands overlooking some greens. On the PGA Tour, this is a frequent point of consternation. Grandstanding, grandstopping, backboarding — the phenomenon has many names, but it’s what happens when players send approach shots into the bleachers and receive the dastardly punishment of…a free drop on a cushy lie.

The Open has taken a decidedly different approach.

We saw this in 2019 at Royal Portrush, when the massive amphitheater surrounding the 18th was far enough removed from the green to allow for long grass, tricky runoffs and yes, difficult drop areas. Here’s what that looked like:

Now they’re back. Royal St. George’s will host 32,000 spectators, which means there are plenty of grandstands, which means plenty of drop areas. From what we can tell, they should be plenty tricky once again. That’s great news.

Suddenly, there’s an element of uncertainty that accompanies a big miss into the bleachers. Sure, you can blow one way long or way right, and you’ll get a free drop — but that free drop could mean an unpredictable lie in some thick hay.

Some people have called for grandstands to be limited or removed to combat this issue. As recently as the PGA Championship, players were aiming tee shots at No. 18 into the hospitality tents down the left side. But this solution is the simplest yet — and the most effective, too.

I’m sadly not in attendance at this week’s but if I was, I’d fix myself a picnic with some pals and post up behind the 3rd green to watch players hack it out of the adjacent drop zone. Looks like these guys have the right idea.

Or maybe I’d post up with this marshal beside an even thicker zone below.

If Golf Channel’s description had it right, there could even be a pivotal drop coming down the stretch, roundly punishing any golfer who misfires into the bleachers.

As it should be.