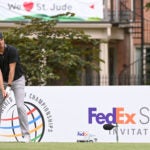 Brendon Todd prepares to hit his tee shot on the 16th hole at TPC Southwind on Saturday.

Nothing went wrong for Brendon Todd during three rounds of last month’s Travelers Championship. Rounds of 66, 65, 61 gave him a two-shot lead entering the final round. They put him in Sunday’s final pairing.

Nothing went right during the final round. Nine pars on the front nine. A triple bogey and two bogeys on the back nine. He tied for 11th.

Nothing makes him feel better than to try again.

He leads by one after three rounds of the World Golf Championships-FedEx St. Jude Invitational. He’s in Sunday’s final pairing, teeing off at 3:05 p.m. ET.

“What I learned at the Travelers is just you cannot control the result, you can’t control the way you’re going to feel, where the ball’s going to land, if putts are going to go in tomorrow,” Todd said Saturday. “I think we all – the best players in the world treat each final round like it’s just another day and they just go out there and try to execute and stick to their game and let the results fall as they do.”

Many of the best players in the world are in the pairings right behind Todd.

At 2:55 p.m., Rickie Fowler and Brooks Koepka tee off. Ten minutes before that, Justin Thomas and Phil Mickelson will begin, with Thomas using Mickelson’s longtime former caddie, Jim “Bones” Mackay, this week and at next week’s PGA Championship.

The fourth-round tee times are below. The Golf Channel will begin coverage of the tournament from 1-3 p.m. ET, and CBSsports.com will continue coverage from 3-7 p.m. ET.