Two of golf’s superstars have surprising new caddies this week 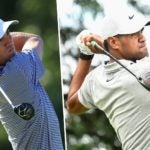 Justin Thomas and Tony Finau each have new faces on the bag this week.

When a caddie gig opens up on the PGA Tour, there’s no lack of candidates for the job. When one of the hottest players on the planet announces he’s making a caddie change? Open season.

When Tony Finau announced after the Memorial that he would be splitting with longtime looper Greg Bodine in favor of a new full-time caddie, he was inundated with requests. “We were fortunate to have had a number of great guys express interest,” his agent Chris Armstrong said.

Last week, Finau went with his coach Boyd Summerhays on the bag and the duo was plenty successful, notching a T3 finish. They had plenty of laughs in the process, too, after Summerhays’ mid-calves and shorts left him with a bright stripe of sunburn on his lower legs.

“I started calling him ‘strawberries and cream’ because he was white, red, white, like a strawberry parfait,” Finau said. But Summerhays will go out (nearly) on top, as both sides made it clear that Summerhays’ role will remain as coach.

This week, Finau showed up in Memphis with a new man on the bag: Mark Urbanek. Before this stint, James Hahn employed Urbanek for a number of years, including both his PGA Tour wins — the 2015 Northern Trust Open and the 2016 Wells Fargo Championship.

In addition to his established caddie credentials, Urbanek has an absolute cannon for an arm. One video captured during a Players Championship practice round put that on display when he tossed a golf ball from the 17th tee box onto the green, a hurl of some 400 feet.

Neither caddie change is long-term. Armstrong confirmed that Finau will exercise patience as he continues the process and that he won’t make any final decisions immediately.

“He’s excited to work with Mark this week. We’ve heard really good things about him.”

Finau’s open gig may have been the hottest spot for free agent caddies, but it turns out that it’s not even the highest-profile caddie change of the week. That’s because World No. 3 Justin Thomas is bringing on one of the most famous caddies of all time for fill-in loops at this week’s WGC and next week’s PGA Championship.

Justin’s father Mike caddied for him on the weekend at the Memorial Tournament after his usual bagman Jimmy Johnson went down ill in the heat. On Wednesday in Memphis, Golf Channel reported that “retired” caddie Jim “Bones” Mackay will take over until Johnson is feeling better after experiencing dizzy spells.

While Mackay’s full-time gig has become as an on-course analyst for NBC Sports, he caddied for Matthew Fitzpatrick at the Workday (T27) and the Memorial (solo 3rd) with good success.

More famously, Phil Mickelson won five majors and 41 PGA Tour events with Mackay by his side — including the 2005 PGA Championship. That means Thomas will have plenty of experience by his side at TPC Southwind and TPC Harding Park these next two weeks.

If Thomas and Finau each keep up their recent form, their fill-in caddies are in line for some serious paydays. And if the fit isn’t quite right? There will be no lack of eligible caddies waiting by the phone, just hoping for a call.