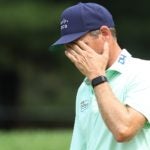 Brendon Todd was in contention to win but dropped out of the top 10.

Brendon Todd was blemish-free for the first 11 holes of the final round of the Travelers Championship. While he wasn’t able to make any birdies and cut into the lead (which he had but lost), his 11 pars still kept him in contention for his third PGA Tour title this season.

Todd’s playing partner, Dustin Johnson, led at 20 under after 11 holes, and Todd was 18 under. He needed to make a move, but he went in the wrong direction on the 12th.

Todd missed the green on the par-4 and was short-sided in the rough. He then bladed his chip over the green — and it got worse from there. His next shot, a big flop from behind the green, came up short and rolled back down a hill toward him. His next, a putt, got to the top of the hill but stayed on the fringe. He then putted on and tapped in for a triple-bogey 7.

Todd tumbled to 15 under overall and in a tie for 4th place, five strokes back of Johnson. The 34-year-old Todd struggled for much of the past few seasons but rebounded with back-to-back wins in November, taking the Bermuda Championship and Mayakoba Golf Classic. He missed the cut in both events since golf returned after its long break due to the coronavirus pandemic, but a victory on Sunday would have made him the first player to win three times this season.

Johnson played the final six holes in one over to shoot a three-under 67 and get to 19 under overall, good enough to beat Kevin Streelman by one. Todd added bogeys on 14 and 18 for a birdie-less day, shooting 75 to finish T11.