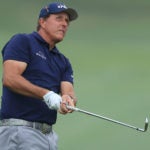 Phil Mickelson hits a shot on the 1st hole at TPC Southwind on Saturday.

The Memphis 11 10ers apparently have a uniform.

“They’re all in matching outfits,” announcer Jim Nantz said during the CBS broadcast.

Their accessories were slightly different.