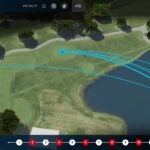 Si Woo Kim's 11th hole on Sunday during the final round of the WGC-FedEx St. Jude Invitational.

TPC Southwind, CBS reported during its Saturday broadcast of the WGC-FedEx St. Jude Invitational, has drowned more golf balls in its waters since 2003 than any other course on the PGA Tour.

Si Woo Kim did his part on Sunday to keep Southwind in that No. 1 spot.

A recap of the carnage:

— Stroke one: Tee shot that fell short of the green and into the water.

— Stroke three: Drop into the drop zone 96 yards from the hole, and a shot that dropped into the water right of the green.

— Stroke five: Drop into the drop zone 96 yards from the hole, and a near repeat of stroke three.

— Stroke seven: Drop into the drop zone 96 yards from the hole, and a shot that dropped to the right of the green, but a little farther than strokes three and five.

— Stroke nine: Drop into the drop zone 96 yards from the hole, and a near repeat of stroke seven.

— Stroke 11: Success. Dry. Finally. Barely. The ball settles about five yards short of the water and just in front of a greenside bunker.

From there, Kim would finish with his 13.

Then birdie the next hole.