Wyndham Championship expert picks: Who our staff thinks will win 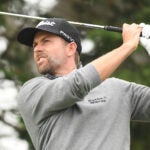 Webb Simpson hits his tee shot on the 4th hole at TPC Harding Park on Sunday.

Entering the 10th week of our game, we’re starting to see trends.

Koepka was playing average, at best, entering last week’s PGA Championship. The four-time major winner was tied for fourth entering the final round. It’s a safe bet he’ll play well in a major again. Morikawa has won more tournaments – three, including the PGA – than he’s missed cuts – one. It’s a safe bet he’ll make a cut (or better) again.

Marksbury has picked two winners. She picked Webb Simpson to win the RBC Heritage in June. She picked Morikawa to win the PGA. It’s a safe bet she’ll pick a winner again.

She, too, looks at trends.

“I like to look at a mix of past performance and current form, so I usually start by checking the past few years of leaderboards at a given venue to come up with a short list of players who have done well,” Marksbury explained. “Then, I look for patterns. Has the same guy posted a few top 20s there? If so, I might pick him just based on that.

“But if not, current form is another important factor. Golf can be streaky, so going with the guy who won or was a T5 player the previous week doesn’t always feel right. Winning and even contending is super draining, and it’s really hard for a guy to go back-to-back. When I picked Webb to win the RBC Heritage, it was because he had a long history of good play there. And this past week with Morikawa, as a hot player back on familiar turf, he just felt right. So picking a player based on his comfort level in his ‘home environment’ can also yield results. That, and some right-pick, right-time luck!”

This week, the PGA Tour is playing the Wyndham Championship at Sedgefield Country Club in Greensboro, N.C. Who does Marksbury like?

Prop: Winning margin, one stroke, +225. Historically, this is a pretty low-scoring event, so I’m counting on a bunched leaderboard that comes down to the wire on Sunday.

To-win: Patrick Reed, +1,600. After a strong showing at the PGA Championship, it’s time for Reed to get back into the spotlight. He’s due.

Top 10: Brendon Todd, +450. What else can you say about Todd this season? He continues to perform week in and week out. He’s become one of the most consistent players on Tour and become a fixture on leaderboards.

Prop: To be decided by a playoff, yes, +400. We were robbed of a playoff at a crowded PGA Championship. Redemption this week.

To-win: Justin Rose, +2,200. His tee-to-green game was scruffy early on at Harding Park. But he looked sharp on Sunday. These are reasonably good odds for a guy who plays at such a consistently high level.

Top 10: Kevin Kisner, +500. Back in the Carolinas. Familiar turf for Kisner. A little home cooking. Guaranteed to beat the cut line and likely to be in contention come the final round.

To-win: Patrick Reed, +1,600. Past winner who seems to have found something of late with two top-15 finishes in his past three starts.

Top 10: Kevin Kisner, +500. Another example of a guy who seems to be trending in the right direction. Followed up a T25 in Memphis with a T15 at Harding Park. Feels like a good spot for Kiz.

Prop: To be decided by a playoff, yes, +400. Took it last week and figured it was a mortal lock on the back nine. I’ll give it another shot.

To-win: Patrick Reed, +1,600. Things have been awfully quiet out of the Reed camp over the past few weeks. That’s gotta change soon, right? How about this weekend?

Top 10: Brendon Todd, +450. Mr. 54 Holes has been playing sensational golf. Even if he hasn’t quite found the gear to turn those 54-hole leads into wins every time, he’s a good bet to turn one of them into a top 10 this week.

To-win: Patrick Reed, +1,600. He’s had some pretty solid but not spectacular results since the Tour’s restart in June. But his game around and on the greens remains among the best in the business, and that’s going to make him a threat every week. He’s won here before, too.

To-win: Sungjae Im, +4,500. Im has been a bit quiet since the PGA Tour’s restart, but he’s as talented as any of the young stars out there. A second victory of the season should surprise no one.

Top 10: Lanto Griffin, +750. Griffin has put together a solid season thus far, notching a win in the fall, and he performed well in his first PGA Championship with a T19. I like Griffin this week in North Carolina.

Prop: To make the cut, no, Brooks Koepka, +225. Koepka got hot for the past couple of weeks, but his final round in San Francisco shows he is far from the player of the past several years. Something still isn’t quite right with his knee, and the mental toll of the PGA shouldn’t be overlooked, either.

To-win: Si Woo Kim, +4,200. Fair warning – I’m going all in on Si Woo Kim this week. He just finished T13 at the PGA Championship, and he finished 5th in last year’s Wyndham Championship. He’s playing well right now and he plays this event well? Sign me up across the board.

Top 10: Si Woo Kim, +500. See reasoning above. But also, by finishing T13 at the PGA Championship, he stayed away from the stress of seriously contending. He won’t come in this week disappointed from the PGA, but rather, he’ll be encouraged by the state of his game.

To-win: Brooks Koepka, +1,200. The Wyndham isn’t the kind of event that usually gets Koepka’s motor running, but his closing 74 at Harding had to go down about as well as a pint of spoiled milk. I think he’s out for revenge this week. Look for an opening 63 or 64, and he never looks back. Could win by a touchdown.

Top 10: Chez Reavie, +1,100. Has quietly had a strong run since the restart (DK reports Reavie is in the top 6 in aggregate strokes gained since Colonial). He put three good rounds together in Greensboro last year before a Sunday 70 bumped him down the ’board.

To-win: Webb Simpson, +1,100. I’m sticking with my same picks because I think they’ll come good, especially Webb, who showed encouraging signs on a course that doesn’t suit him – and now he gets to play one that very much does.

Top 10: Brendon Todd, +450. Back to the regular season, where King Todd gets to rack up another solid finish — off the back of a top 20 last week.

Top 10: Harold Varner III, +650. Look, HVIII has been hitting it great. Once his putter gets hot, look out! It may as well come this week.