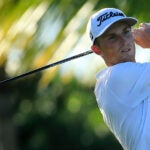 Will Zalatoris hits his tee shot on the 16th hole at Corales Golf Club last Friday.

It’s not you, it’s golf betting. Last week, you put in all of your time and energy, and really fell truly, madly, deeply for Will Zalatoris or Mackenzie Hughes, then along comes Hudson Swafford, who hadn’t freaking won in three years and was going off somewhere around the undesirables at 200-1, and breaks your heart and runs away with your bank roll. Thank you, Hudson Swafford. Thanks.

It’ll be OK, say three betting experts. Get back out there. There are other Scottie Schefflers in the sea.

Over the past 16 weeks, this space has dispensed wisdom on how to win. This week, it also offers a lesson on how to lose.

“Good shooters keep shooting,” Brady Kannon said over email. Kannon is a member of the Vegas Stats & Information Network and a host of the website’s “LongShots,” which airs every Tuesday through the Masters. “If you hit a cold streak, you have to understand that this can happen to anyone — even for an entire season sometimes — and it is not a reason to quit or give up. Taking a week off might not be a bad idea, but I would probably still handicap the event — maybe just not risk any money and see how you do.”

“If a cold streak occurs, stay the course as any fluctuations in units would hinder long-term profitability,” Jeff Sherman said over email. Sherman is the Westgate Las Vegas Resort & Casino vice president of risk management and golf oddsmaker. “This is all dependent on how much flexibility in bankroll one has, though.”

Kannon said it wouldn’t hurt to “maybe step back and take a look at your methods.”

“Are they really predictive? What are you basing your conclusions off of? How about your filter?” he wrote. “Oftentimes, you can soak up too much information and confuse or muddy up some of your original instincts. Refine your filter and your system in an effort to block out an overload of noise that can easily alter your thought process.

“Nick Faldo says in playing golf, if things start to get a little sideways and you’ve made a few bad swings in a row or had a few bad holes in a row, then slow everything down. Slow down your backswing, your pre-shot routine, your breathing, etc. Same thing here — slow down, minimize risk, breathe, relax, take a step back and reassess. If you are good at what you do, you will figure out how to take smarter, better, higher-percentage shots.”

Wrote Wes Reynolds, also a member of the Vegas Stats & Information Network and a host of “LongShots.” “If it’s on the futures board, don’t play outright wins and perhaps just play Top 20-type props. For matchups, try to find consistent players who are making cuts each week. Matchups are also the way to go because you have to beat only one player and not an entire field.”

This week, the PGA Tour is playing the Sanderson Farms Championship at the Country Club of Jackson in Jackson, Miss. Our Alan Bastable has yet to pick a winner, but, you know what, he’s getting right back in the game. He’s going to find the one. Who does he like this week?

“The Korn Ferry stud continues to impress in the big show, following his T6 at Winged Foot two weeks ago with a T8 at Puntacana,” Bastable wrote. “This is his time. He’s ready.”

To-win: Sungjae Im, +1,600. Im finished second last year after losing in a playoff. Happy to bet on him to get it done this year.

To-win: Denny McCarthy, +6,000. I want the Tour’s 2020 Strokes Gained: Putting leader. It’s a bit easier to hit greens here, so I want the player who can make putts.

Prop: Leader after Round 1, Kristoffer Ventura, +7,000. Another pick for putting. He was fourth in Strokes Gained: Putting in 2020.

To-win: Patrick Rodgers, +7,000. Guy is knocking at the door constantly. When is it gonna open?

Prop: To be decided by a three-man playoff, +2,000. Might just do this for weeks and weeks until it hits.

To-win: Adam Long, +3,500. Still smarting from his final-round fizzle in the Dominican, but I’ll give him another shot.

To-win: Sungjae Im, +1400: Really seemed to be turning a corner down the stretch of the PGA Tour season, now faces a lighter-than-usual field. I like Im.

Top 10: Adam Long, +400: Coming off a red-hot week at the Corales Puntacana Championship, I like Long for back-to-back top-10s.

Prop: To be decided in a playoff, +400: Feels like it’s been a while since we had a tournament end with a playoff. Either way, you can’t go wrong betting on intrigue.

To-win: Sebastian Munoz, +2,800. A sleeper no longer after such a strong 2020. But still undervalued at these odds.

Top 10: Sungjae Im, +200. What happened to that Iron Byron ball striker we saw at the Presidents Cup? He went into hiding for a few months, but he’s back within our midst. A top 10? How do you say “slam dunk” in Korean?

To-win: Chez Reavie, +4,450. I might be a victim of the moment here, but I just watched Chez Reavie on GOLF’s Subpar and I’m sold. Reavie is a solid, consistent player on Tour, and I’m taking it as more than a coincidence that his name jumped out at me fresh off his podcast appearance.

Top 10: Martin Trainer, +8,000. Trainer, who has had GOLF’s own Dylan Dethier and Sean Zak on his bag at one point in the past year, is long overdue for a solid week. I’m taking a flier on a GOLF.com favorite with odds like that.

To-win: Scottie Scheffler, +1,200. He was one of the hottest golfers on the planet until a positive Covid-19 test sidelined him. He’ll make a splash in his return.

Prop: To be decided by a playoff, yes, +400. Not very scientific, but I like these odds, and playoffs are fun.

To-win: Doc Redman, +4500. He’s got two top 3s in his last three starts dating back to last season, and he hasn’t played each and every week like some others, so he should be well rested.

Top 10: Will Zalatoris, +250. Zalatoris hasn’t finished outside the top 20 in any start between the PGA Tour and Korn Ferry Tour since February. He’s as hot as any golfer in the world right now and he should keep the momentum going this week.

Prop: Jason Dufner 1st hole of the tournament score, over par, +1000. Some day I’ll get one of these random props right. Maybe Dufner has a poor warmup Thursday? Who knows.

To-win: Zach Johnson, +2,500). He finished T8 at the U.S. Open at Winged Foot, and as someone who doesn’t hit the ball terribly far, that tells me his game is firing right now. He also finished T14 at the Sanderson last year, so I like the value here.

Top 10: Henrik Stenson, +550. Stenson is fresh of finishing T21 in Punta Cana, so his game has to be at least in decent shape. Enough to finish, say, inside the top 10 this week? Let’s hope so.

Prop: To be decided by a playoff, yes, +400. I talk myself into making this bet every week, and I’ve done it again. +400 just seems so enticing for this prop.

To-win: Luke List, +5,500. The Luke List Train isn’t quite about to leave the station, but it’s time to use the bathroom, buy a family-sized bag of peanut butter M&Ms from Hudson News and find yourself a seat! This is the week. Maybe.

Top 10: Luke List, +550. If you read that last paragraph you should know that I’m committed.

Prop: Top 20, Will Gordon, +750. This is more of a feel pick, and if you look at the number next to my name, you’ll see that my “feel” stinks! So best to just steer clear here rather than follow me.

To-win: Will Zalatoris, +2,200. The Korn Ferry stud continues to impress in the big show, following his T6 at Winged Foot two weeks ago with a T8 at Puntacana. This is his time. He’s ready.

Top 10: Patrick Rodgers, +650. Rodgers broke my heart last week in the D.R. with a T11 finish, one place out of the money. This week, he redeems himself (and myself).

Prop: To be decided by a three-man playoff, +2,000. Time to roll the dice. Could really use the dough.