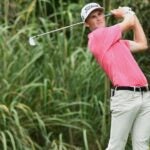 Will Zalatoris might be the unlikeliest of names among the top-10 finishers at last week’s U.S. Open.

On a final leaderboard packed with PGA Tour winners and former major champions, Zalatoris’ name stuck out. But that’s no insult to his game — he proved he has plenty of that as he fought his way to a T6 finish in his second major appearance. Truth is, he just hasn’t been around the pro ranks very long.

Zalatoris is a member of the Korn Ferry Tour, golf’s top development circuit which provides the most direct path to the big-boy Tour. But despite his “minor-league” status, he is the betting favorite in this week’s Corales Puntacana Resort and Club Championship — an almost unheard of feat for a KFT player playing up a division. Most KFT players play up on Tour when they can, with a nice paycheck waiting at the end of the week if they play well. Zalatoris, however, enters this week as the man to beat.

But the favorite status has been earned, even if you haven’t heard of him. In 16 KFT events this season, he’s made every cut and finished outside the top 25 just once. He owns 10 top 10s, one of them being a win, and is leading the points list by a wide margin. His T6 last week put an emphasis on what has been a breakout year for the 24-year-old.

“Winged Foot was incredible,” Zalatoris said. “(But) I can’t say I’m not surprised with a T6 finish in the U.S. Open. I know I’ve had some success on every level so far in my career, but obviously having that high of a finish and competing against the best in the world and finally doing it. It’s one thing to tell yourself that you can do it, it’s another actually doing it.”

This level of confidence is something that dates back to the early days of his professional career. Zalatoris decided to forgo his final semester of eligibility at Wake Forest in the spring of 2019 and instead opted to try to earn his way onto the KFT. He had no status to begin the season, but eventually earned member status via Monday qualifying.

Once he became a member, he didn’t play as well as he’d have liked, but well enough to hang around. At one tournament last summer, he told me, “I know that I’m good enough that I’ve won at every level. I know that eventually I’ll win here, it’s just a matter of time.” It seemed like an aggressive statement at the time for someone with just two career top 10s, but he was spot on with his prediction.

This year, at that same event in Colorado where he made his prediction last summer, Zalatoris took a 54-hole lead into the final round. In the parking lot before teeing off, he wrote his winner’s check to his caddie, calling his shot before he’d even teed off.

He shot 69 and won by one, making certain that his caddie’s check would clear.

“I think he’s going all the way to the top,” predicted Tony Romo, an accomplished amateur player who plays with Zalatoris at Maridoe Golf Club in the Dallas area. “(He’s) going to be pretty good.”

Zalatoris’ sophomore season on the KFT has proved that prediction correct. He’s has been nothing short of dominant, which earned him his spot in the U.S. Open.

His week at Winged Foot started a bit slow as he fired even par in the soft scoring conditions on day one. The brutal second round was more of the same as he only managed a 74 to squeak inside the cut, but his weekend performance was among the best in the field. His third-round 70 vaulted him up the leaderboard as just seven players managed to break par, while his Sunday 71 was among the top-five scores on the day.

“It was a great experience,” he said. “I’ve been playing well all year. I just found out that obviously top 10 gets us into next year too, so that’s obviously pretty exciting.”

Zalatoris leaned on his ball-striking to power his top-class performance — a skillful display that had his fellow players and the media in awe. His tee-to-green performance was the best in the field as he gained 7.97 shots with his irons over the course of the week. Oh, and he had a hole-in-one. He called the performance with the irons “black out,” and bested the world’s stars on one of the most demanding courses around.

His attention now turns to this week’s event in the Dominican Republic. He knows he’s one more solid performance away from being a weekly staple on Tour, but this time he’ll have to do it not as an unknown, but as the favorite. Maintaining his high from last week will be key, but it’s a challenge he’s ready to face.

“Last week was a lot of fun, but at the same time it was a little draining,” Zalatoris said. “The task is always the same no matter what tour or what event I’m playing in … Just get better today.”