Ryder Cup expert picks: Who our staff thinks will win at Whistling Straits 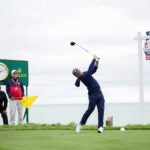 Xander Schauffele hits his tee shot on Tuesday on the 4th hole at Whistling Straits during a Ryder Cup practice round.

Europe, they of Ian Poulter and bulging eyes and seven wins in the past nine versions of this biennial? Or the U.S., they of Bryson DeChambeau and bulging biceps and home-course advantage?

Our picks, along with our choices for MVPs for both sides, are below. In addition, should you be looking to make a (legal!) wager yourself, we teamed with BetMGM, and the online sportsbook is offering a new promotion for the Ryder Cup: Bet $1 Win $100 if Any USA Golfer Wins Their Match! Sign up for an account to get into the action today.

Team winner: Until the U.S. finds a way to consistently prove me wrong in the Ryder Cup, I like Europe. There’s less drama, more motivation, and I think the old guard — Poulter, Westwood, Sergio, etc. — has one more big week left in them.

U.S. and Europe MVPs: Jon Rahm is going to be almost unbeatable this week, and his Player-of-the-Year snub will serve as added motivation. As if the best player in the world needed any. For the U.S., I like Spieth to have a big week. He’s a veteran now, and if the Americans are going to win, they need a big output from him.

Team winner: Europe. There’s a cultural difference between Europe and the U.S. The Europeans are better at coming together as a team for one week every two years, and it helps them embrace and survive the hostile crowds on U.S. soil. Team chemistry is extremely important when it comes to this event, as is making putts, and Europe has the ability to do both in spades.

U.S. and Europe MVPs: For the U.S., it’s Collin Morikawa. He’s calm, cool and, most importantly, consistent. His game travels well, and despite being a rookie, he’s going to be a tough guy to beat since almost nothing rattles him. For Europe, it’s Viktor Hovland. Sure I might be high on Ryder Cup rookies, but literally every single member of Team Europe said they wanted to play with Hovland when asked. They don’t call him the “Smiling Assassin” for nothing. I can see him merrily putting out to win Europe the cup and silencing the crowds already.

Team winner: U.S. As a New York Giants fan, I know a thing or two about blind belief in the face of overwhelming evidence to the contrary, which is why I’m rolling with the Americans this week at Whistling Straits.

U.S. and Europe MVPs: For the U.S., it’s Xander Schauffele. He’s a shocking Ryder Cup rookie, but with his putting and ball-striking prowess, he might also be the player best-equipped to go nuclear for the Americans in a win. For Europe, it’s Ian Poulter. He’s been draining clutch putts for the Europeans since the Lincoln administration, he’s going to drain clutch putts for them this week, and he’ll still be draining clutch putts for them when President Bryson is the first-ever octogenarian player-captain for the United States of DeChambeau in the 2077 Ryder Cup.

U.S. and Europe MVPs: For the U.S., it’s Xander Schauffele. There are plenty of talented duos that will come together this week, but I think Schauffele/Cantlay are the very best — and Schauffele is listed as more of an underdog in the sportsbooks, so he represents better value. I like 2.5 or 3 points from these guys as a team, and then Schauffele rolls in his singles match come Sunday. For Europe, it’s Paul Casey. He’s flying under the radar but playing quite well and seems suited to Whistling Straits. If he can dodge the top U.S. teams, I like Casey as a sleeper MVP.

Team winner: Europe, obviously. It’s a well-oiled machine at this point. Everyone buys in, not just the week of, but the two years leading up to it. Oh, and they have the best player in golf, too.

U.S. and Europe MVPs: It’s a bit boring, but Jon Rahm makes too much sense. He’s playing the best golf of his career, is fresh off his first Ryder Cup, where he toppled Tiger Woods, and he’ll almost certainly play at least four matches. As for the U.S., I can’t help but think Scottie Scheffler will rise to the occasion. Word is that he’ll likely play with Bryson this week; if the rookie can put Bryson at ease and get the best out of his own impressive game along the way, he could prove the key to a U.S. victory.

Team winner: U-S-A! U-S-A! The home-soil advantage will be tough to overcome for Europe. And whatever lingering dysfunction there has been between Bryson and Brooks appears to have been snuffed out. The Americans are young, fresh and baggage-free. I think this week will belong to the red, white and blue — in convincing fashion.

U.S. and Europe MVPs: This week will be a huge one for Bryson DeChambeau. He thrives on positive energy, which will be overwhelmingly directed at him in Wisconsin. Given his previous Ryder Cup record, he has a lot to prove, and I think he’ll rise to the challenge this week. For Team Europe, it’s got to be Jon Rahm. He’s everything you don’t want to face in match play: talented, passionate and fired up beyond belief. Will be fun to watch!

Team winner: The Euros take this one. Team USA might be superior on paper, but Team Europe just knows how to get it done in the match-play format.

U.S. and Europe MVPs: I like the Patrick Cantlay heater to continue into the Ryder Cup for the Americans, while on the European side, I’m going to go with Sergio Garcia. He’s going to make a statement in his (likely) final Ryder Cup appearance.

Team winner: U.S. To be transparent, I had this as Europe until this morning, in full belief of the chemistry card the Europeans have played on their way to seven wins in the past nine cups. Then I heard a line from Jordan Spieth on Tuesday that made me think the Americans might actually have some of that juju, too, along with their more impressive resumes. “We’ve known everyone on this team since grade school except for Dustin and Tony,” Spieth said. “I mean, it’s pretty special. So you have a camaraderie. It’s kind of more like a really light setting. Guys have known each other for a long time.” Camaraderie? Light setting? Sounds … European to me. Or like winning.

U.S and Europe MVPs: For the U.S, it’s Justin Thomas. Not only will he win the most points, his energy will win a few more for others. For Europe, it’s Shane Lowry. I wrote about this in this week’s Tour Confidential, but the man has won an Open Championship — and said making the team was his most proud accomplishment. He’ll deliver.

Team winner: The home crowd will propel Team USA to victory. The Ryder Cup crowd seems to get rowdier and rowdier every two years. Now, after a three-year wait and pent-up anticipation, emotions will be riding high. Wisconsin is a swing state that teeters between red and blue. For this week, it will come together as red, white and blue.

U.S. and Europe MVPs: I think Scottie Scheffler has the perfect demeanor for a match-up. He keeps his emotions in check and lets the explosiveness in his game do all the talking. I like the rookie to become a valuable piece to the U.S. this week. For Europe, I’m going with Poulter. The seasoned Ryder Cup vet will come through — again. And he will torment the American crowd — again. Poulter will do his part to silence the crowd.

Team winner: Europe. I expect this to be a dogfight, with match after match going down to the wire, and the whole thing being decided by a point or half-point. It could easily go the other way. But the Europeans have the benefit of being cast as “underdogs,” a psychological edge that allows them to play looser. Or so it seems. The irony is that this time around, I’m not convinced the U.S. team really is “stronger on paper,” unless you’re under the false belief that length off the tee and world rankings are what win this event.

U.S. and Europe MVPs: For the U.S., it’s Jordan Spieth. Invariably, it comes down to putting. No one makes more miles of putts than Spieth. For Europe, it’s Shane Lowry. If his performance at the Open at Portrush was any indication, the man brings his best when playing for pride and country. I suspect he’ll also bring out the best in his likely playing partner, Rory McIlroy. But in any format, Lowry is going to be a tough beat.

Team winner: I’m throwing unbiased journalism aside here in the name of patriotism. While they’ve lost four of the past five Ryder Cups, I believe Team USA will put all the drama aside this week and roll the European squad at Whistling Straits.

U.S. and Europe MVPs: Brooks Koepka has been in the news a lot lately, with some comments that have rubbed people the wrong way. But Koepka is a gamer who rises to the occasion when it’s competition time. I’m predicting a big week from him that silences the haters (at least for now). For Europe, it’s Jon Rahm.After the player-of-the-year snub, he may have even extra motivation to play well this week. And really, who’s been playing better golf recently than Rahm? He’s going to be a real problem for Team USA this week.

Team winner: My gut tells me to take Europe, but I’ll go against the grain and say the United States finds a way to win with a bunch of fresh-faced rookies. Chemistry be damned!

U.S. and Europe MVPs: For the U.S., Xander Schauffele is going to do some damage this week. He earned three points in his Presidents Cup debut and is the kind of guy you can plug-and-play in any format. He’s Steve Stricker’s security blanket. On the other side, the last thing Team USA wants to see is a motivated Jon Rahm. He’s playing some superb golf and was recently snubbed by his peers for PGA Tour Player of the Year honors. Expect him to go scorched earth at Whistling Straits.

U.S. and Europe MVPs: For the U.S., it’s Tony Finau. Big Tone has the game for this course. He’ll go out in the first session and play well enough to earn the afternoon start. Stricker will be forced to send him out again and suddenly Finau will be 4-0-1 before we know it. For Europe, it’s Jon Rahm. This’ll be a different Whistling Straits than we’re used to. It should be breezy on Friday. Brisk on Saturday. Perfect on Sunday. No one’s game is more adept to new conditions than the best player in the world. Cop-out answer? Perhaps. The correct one, though!