The secret to making Whistling Straits’ show-stopping lamb entree, according to the course’s chef 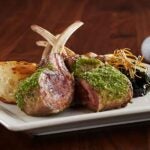 The garlic in the lamb's savory coating — like most vegetables served in the restaurant — is sourced from local Wisconsin farms.

Herb Kohler’s intention for Whistling Straits to pay homage to the linksland of golf’s birthplace doesn’t end on the 18th green.

It extends to the fare on offer in the course’s namesake restaurant. The menu’s undeniable shining star, the roast-garlic-crusted Strauss lamb rack with lamb jus ($53), is a signature entree and another ode to the Irish and Scottish mealtime mainstay.

Whistling Straits restaurant manager and chef Dan Dries seasons each half-rack with olive oil, salt and pepper, and then grills and roasts the chops to each guest’s desired temperature — typically medium rare. The finishing touch? A roasted garlic puree, along with a breadcrumb and fresh herb coating.

The lamb is locally sourced from Strauss, a Wisconsin-based supplier that’s been family-run for four generations.

“I think that’s what people are looking for,” he says. “Knowing that they’re getting quality in their meal and something that they can tell a story about too.”