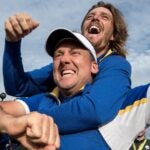 Ian Poulter is a Ryder Cup legend, boasting a lifetime record of 14-6-2.

Statistically, Ian Poulter doesn’t look like one of the best golfers at this year’s Ryder Cup. By most advanced metrics, he’s among the worst.

Poulter was laughing on SiriusXM PGA Tour Radio Wednesday as he faced down the Ryder Cup question everyone has been asking. The host, Michael Breed, put it well: “It’s easy to look at the [European] team and say you are underdogs and yet what you have is you have history.  And history says we’ve won four out of the last five, seven of the last nine, and nine of the last 12.”

Poulter’s European teams are 4-2 when he plays. He owns a 14-6-2 record across those six Ryder Cups. No European with more career points than Poulter can match his win percentage, and the next singles match Poulter loses will be his first; he’s 5-0-1. It may not make much statistical sense, but that’s why we turn to different metrics when measuring Poulter’s success: Strokes Gained: Peskiness. Strokes Gained: Screaming Like A Madman. Strokes Gained: Driving American Fans Batty.

To hear Poulter tell it, the Europeans have been able to channel something. He might not know exactly what that something is. But he has no interest in breaking down the recipe for the flummoxed Americans, either.

“There is a level of magic sauce which we’ve been able to create over the years. And, you know, it’s not really for us to kind of discuss in a way, in terms of, you know, sharing what we have as a bond, as a team, which make us so successful,” he continued. “You know, it’s always a wonderful position to be able to go and win from that position as an underdog, because it’s not supposed to happen. And that’s what makes match play so amazing. And that’s why I think we enjoy it so much. We embrace each other as team members. We get on, all of us get on great. And, you know, we enjoy what that means. And, you know, we know there’s been some rift with some of the players on the U.S. team, but that’s on them, not on us.”

To Poulter’s point about European enjoyment, Wednesday’s golf media conversation surrounded Brooks Koepka’s Golf Digest interview where he expressed a general disdain for the Ryder Cup format. Former U.S. captain Paul Azinger even suggested he sit out, if he’s disinterested. The comments struck a nerve because they seemed representative of a general U.S. failure to set individual goals aside for a week to focus on a common opponent.

To Breed’s point, it seems nonsensical that the same side that has won seven of the past nine Cups will enter next week as an underdog. But this U.S. team has an average world rank around 9. Europe’s is closer to 30. That number seems like it should be important. Team USA has also played 49 collective Ryder Cup matches, compared with 168 for Team Europe. That number could matter, too.

We’ll see who gets the last laugh this time around.

How to bet on the Ryder Cup