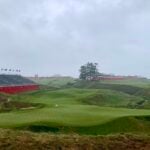 Whistling Straits will be quite the stage for this year's Ryder Cup.

Welcome to Wisconsin, folks. And before we tuck into some brats, pick up a custard from Culver’s and turn on the Packers Monday Night game, let’s review some notes from Day 1 scouting the course.

For much of Monday, there were no golfers on the course but there was plenty of golf course nonetheless. So co-worker Luke Kerr-Dineen and I put on our walking shoes and trekked out to explore Whistling Straits. We made this video, which I’ll expand on ever so slightly below…

It’s very cool. Players will walk from the practice green over a little stone bridge and then through the belly of the bleachers before emerging before a roaring crowd. The stands aren’t as big as Le Golf National but they’re plenty big. They’ll be plenty loud. Good stuff.

It’s about 350 yards to the front edge and 364 yards to the middle, which means with the right wind Bryson DeChambeau could let the big dog eat and make the home fans happy.

The powers that be at the Ryder Cup seem to have decided that golf media members aren’t quite dorky enough, so they unleashed these department-store-greeter red vests on us. Good times!

It’s…not very rough. At least, not when you miss by just a little bit. Fans were wondering if Captain Stricker would avoid a narrow, long-roughed repeat of Le Golf National — and they were right.

Yes. And on the holes that abut Lake Michigan, you can really feel it. Into the wind, you’ll see plenty of awkward lies and carnage — short rough or not.

I was particularly taken with No. 8 tee, which sits on the edge of Lake Michigan. It’s a 507-yard par-4 where the fairway is…completely invisible. There’s more room than it looks like, a sentence that seems to make Pete Dye happy. But still…

It’s everywhere. It’s there to mess with you, both visually and practically. And all those little scab bunkers dug out of the hills are worth avoiding.

10. Is Whistling Straits a links course?

Sure! It’s linksy in some ways, connecting the land to the Great Lakes. But it’s an American links, softer, greener and more manicured than its cousins across the pond.

At the Solheim Cup a couple weeks back, a ridiculous proportion of matches made it to the 18th. We’ll hope to be so lucky here so we can see the world’s best battle it out on a wild, challenging par-4 with a rollicking green and several massive bleachers. Game on!