Rules Guy: Can a ball marker be considered a training aid? 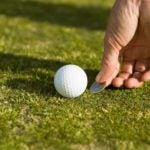 Is there ever a time when a ball mark could be considered a training aid?

We’ve seen the putting drill in which you focus on a coin or mark so as not to move your head. Is a ball marker considered a training aid? Is there a rule that says I must pick up my marker after placing my ball? Once I place it down, isn’t the ball in play regardless? If so, can’t it just be played at that point? —Jim O’Neill, via email

Not fair, Jim — you’ve cleverly snuck four questions into one!

Still, you get only one answer, and that answer is an emphatic No!

A ball marker must be lifted before a stroke is made. Failure to do so is a one-stroke penalty, under Rule 14.1a, and you must play the next shot from wherever the ball comes to rest. That would certainly be a black mark on one’s Rules record.