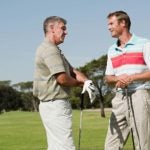 Two golfers made an agreement during their match play competition, but are they now disqualified for it?

In the Players Edition of the Rules of Golf, Rule 3.2d, “Your responsibilities in match play,” it says: “If you and your opponent deliberately agree to ignore a breach or penalty you both know applies, you are both disqualified.” My question is what are we disqualified from — the hole, the round? We play in a friendly but competitive league, and I’ve seen these things happen often. —Jim Rutherford, Phillips, Wis.

Jim, you are forbidden from picking up a golf club ever again! Just joshing. Players who knowingly flout the Rules of Golf are flogged with a 1-iron to their posterior until they can explain Rule 12.2b(3). Still joshing! You are disqualified from the competition; whether the league wants to impose further sanctions outside the Rules of Golf is a private matter the Rules don’t delve into. There is one relevant exception that Rules Guy finds fascinating: In match play, you are free to overlook an opponent’s breach of the rules. You’re playing Frankie Foot-Wedge and want to keep his repeated transgressions to yourself? That’s fine, since you’re potentially hurting only yourself or your team; this is not considered waiving a Rule of Golf. What you can’t do is make your opponent aware that a penalty should be applied and then not do so — once you’re both aware, the penalty is obligatory. So with apologies to that persistent Mercedes advertisement on golf telecasts, either mum’s the word or it isn’t.