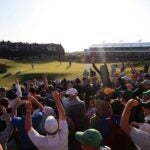 Check in each day of this week’s Open Championship for the unfiltered opinions of our writers and editors as they break down the hottest topic in the tournament, and join the conversation by tweeting us @golf_com.

An Open champion will be crowned Sunday. In the third round, Louis Oosthuizen hung on to his first- and second-round lead with a one-under 69, and he’ll enter the final day at Royal St. George’s leading by one over Collin Morikawa, and by three over Jordan Spieth. Lurking five back is U.S. Open champ Jon Rahm. It’s your last major prediction of the year! Tell us: Who wins the Claret Jug?

Zephyr Melton, assistant editor (@zephyrmelton): Collin Morikawa. His ball-striking on the back nine on Saturday was clinical, and his distance control is unmatched. He’s going to ball-strike the field into submission and hand Oosty yet another runner-up finish on Sunday.

Nick Piastowski, senior editor (@nickpia): Louis Oosthuizen holds on. When it seemed like he and we were beginning to look at another also-ran finish after a pair of bogeys early on the back nine, he birdies 16 and pars out from there. That says something to me. So does that player after player this week have remarked that he’s playing at a different level. Oosthuizen wins major No. 2.

Jessica Marksbury, multimedia editor (@jess_marksbury): I’m with you, Nick. Morikawa is playing beautifully, but I think Oosthuizen has the experience required to pull this one out — especially if we get a little wind.

Sean Zak, senior editor (@sean_zak): It’s Collin! These greens aren’t fast enough to make him quiver. All he has to do is exactly what he does best: hit long irons for days. I think he shoots 66 to win by multiple strokes.

Josh Berhow, managing editor (@Josh_Berhow): Louis Oosthuizen will finally win his 2021 major. Even in his recent major losses it was never like he blew up. He’s been consistent, he has a great game for links golf and he’s carried the perfect attitude despite these tough losses. He’ll get major No. 2 on Sunday.

Alan Bastable, executive editor (@alan_bastable): I’m with the Z-Men. Morikawa’s precision with his irons has been awe-inspiring. If the R&Aers continue to place pins on knobs and other hard-to-reach spots (which they will), accuracy into the greens will remain paramount. Leave the ball in a good spot, give yourself a solid look at birdie and roll in a few. Simple formula. Players who short-side or bunker themselves Sunday will quickly fade from contention.