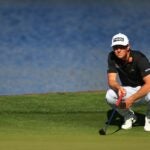 Viktor Hovland's day at the Players Championship was highlighted by rules fiascos — one on the 11th hole, and another he self-reported post-round.

Viktor Hovland was in the rule book quite a bit during his first round at The Players Championship. His rules fiasco at the 11th hole was highlighted by a late about-face after a video review, but that wasn’t the last time he was caught up in some rules drama on Thursday

After Hovland completed his round, it came to light that the young Norwegian had yet another rules snafu just four holes later on the 15th. Hovland self-reported that he had failed to replace his ball marker after moving it to get out of playing partner Justin Thomas’ line. Instead of moving it back to the original spot, he moved it another putterhead length in the opposite direction.

Because of this, he was assessed a two-stroke penalty under Rule 14.7 for playing from the wrong spot.

Rule 14.7 states that “after starting a hole you must make each stroke from where your ball comes to rest, except when the Rules require or allow you to play a ball from another place.” It continues by saying that if you “have played from a wrong place but it is not a serious breach, you get the general penalty.”

Given the two-stroke penalty Hovland was assessed, his first round of two-under 70 was adjusted to an even-par 72.