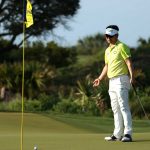 Y.E. Yang was disqualified from the 2021 PGA Championship for signing an incorrect scorecard on Friday.

On Friday at the 2021 PGA Championship, Y.E. Yang was disqualified from the competition for signing an incorrect scorecard. The veteran pro, now ranked No. 672 in the world, accidentally wrote down a “4” on his scorecard for the par-4 10th hole instead of a “5.” It is not known whether he used a pen with ink or the traditional golf pencil. The error changed his would-be second-round 84 (now erased from the record books) to an 83.

The disqualification had little effect on how things turned out for Yang or any of his competitors at Kiawah Island. At that point he had no chance of making the cut, let alone winning the tournament, even without the DQ.

But it still sits wrong for a few reasons. For one, Yang is a former champion. He famously came from behind on Sunday to defeat Tiger Woods at the 2009 PGA Championship at Hazeltine National Golf Club in Minnesota, something no player had ever done before.

He was also the first Asian-born man to win a major championship, and the only one until Hideki Matsuyama’s triumph at the Masters in April. But even if Yang was the least-talented PGA professional in the field, he still shouldn’t have been disqualified for scribbling down the wrong number. In this day and age, no player should.

Rule 3.3b of the Rules of Golf is to blame, along with a traditional aversion to change in the game of golf.

Imagine if Yang hadn’t been heading toward a missed cut at this PGA, but instead had signed an incorrect scorecard on that life-changing evening in Hazeltine back in 2009?

Many golf fans know that major championship golf is no stranger to such a scenario. At the 1968 Masters, the reigning Open champion Roberto De Vicenzo should have faced Bob Goalby in a playoff Sunday evening. Instead, he too scratched out the incorrect number on a single hole, resulting in the game’s most infamous disqualification.

Surely the rule exists to prevent golfers from cheating by way of recording lower scores than they actually made. But that level of deception is not possible in the modern game.

Even back in 1968, players and tournament officials knew De Vicenzo’s true score. After all, someone had to determine he had the wrong number to DQ him in the first place. In 2021, nearly a half-century after De Vincenzo’s gaffe, there’s no logical reason to hang so much on something so ineffectual.

Every golf fan on planet Earth with internet access can see every player’s official score directly from the tournament, or from various other golf websites like this one. At the majors, every single shot is recorded on video, and in some cases available for viewing minutes after they occur.

So why are we making players worry about redundantly writing scores on a scorecard at risk of disqualification at all?

Instead, it seems to make much more sense, at the professional level at least, to do away with player scoring altogether. Simply have an official scorer or two follow each group (something that essentially already happens for other purposes, like powering internet leaderboards).

If a dispute arises, go to the tape. Players can continue to keep their own scores for whatever reason they wish, but no longer need to wager their livelihoods upon making the correct scrapes with a pencil.

It’s one thing to leave rulings to self-policing in keeping with the tradition of the game. It’s another to maintain an antiquated score-recording system when a better, more accurate one already exists.