How a nation with only 150,000 golfers has 11 players in the PGA Championship field 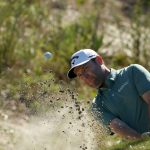 Branden Grace of South Africa in the first round of the PGA Championship.

KIAWAH ISLAND, S.C. — The crack reporters at the Baseball Almanac will tell you that 17,150 players from the United States have played Major League Baseball, with California producing 2,347 of them. With those fun facts in mind:

Doug Ferguson, crack golf writer at the Associated Press, will tell you that of the 156 golfers in the original field at this 103rd PGA Championship, 11 are from South Africa, including Branden Grace, flying way north on your second-round leaderboard.

If you’re following the scores on the PGA of America’s joy-to-the-world website, each golfer’s home country is indicated by his home flag beside his name. The modern (since 1994) South African flag depicts a green Y on its side with a red polygon above it and a blue one underneath it, with blue, white and gold border lines accenting the whole thing. It’s interesting.

Here’s another interesting thing. Of those 11 golfers from South Africa? Nine of them are of Afrikaners, or went to an Afrikaans school, or speak the Dutch-influenced language. They are Grace, Dean Burmester, Christiaan Bezuidenhout, Louis Oosthuizen, Erik van Rooyen, Garrick Higgo, Daniel van Tonder, Charl Schwartzel and George Coetzee.

If, over the years, you could give some judicious mulligans to Retief Goosen, Trevor Immelman and especially Ernie Els, they’d add to the Afrikaner count in the field, too, playing as past champions. Especially Ernie. He had six top-10 finishes in the PGA Championship.

Nick Price, by the way, a two-time winner of the PGA Championship, was born in South Africa, though his family moved to Zimbabwe when he was eight. Price, asked on Friday to explain the large number of world-class South African golfers, said, “They have great weather there, great courses, some wonderful academies and learning facilities, not only for golf but for all sports. There’s a huge depth of talent in South Africa.” It is a country with about 58 million people. The U.S. population is 331 million.

This record number of South Africans in a major (11), this field-within-the-field, is way beyond a statistical anomaly: even today, South Africa has only about 150,000 golfers. Can you imagine if there were a half-dozen golfers from New Mexico in the field this week? Notah Begay (native son) would be in high demand for commentary! Instead, we have Mr. Els.

“I would have loved to be in the field this week, I love playing by the ocean,” Els said in a phone interview on Friday morning from his home — near the ocean — in South Florida. “But it’s absolutely incredible to see all these South African golfers in one major, and so many of them who speak Afrikaans. We’ve got good young golfers coming up in droves in South Africa.”

Afrikaans is Els’ native language. There’s a Germanic quality to his English. Incredible comes out EEENN-KRED-a-bill (sort of), each syllable distinct and heavy.

“Every one of these players has an incredible story,” Els said of the players in the field this week. He noted that South African golfers of English descent sometimes come out of a more affluent background. (Player, most decidedly, did not.) But the Afrikaans golfers often descend from farming families and other working families. Els went through the whole roster. “This Daniel van Tonder, have you seen him? His father was a boxer, and he’s as big as a house.

“This Garrick Higgo — he’s a great kid,” Els said, continuing. “Very devout Christian. Went to UNLV, at least for a while. He calls me and says, ‘Uncle Ernie, this Las Vegas, it’s not for me.’ He stayed with our family in Florida for a while. I said, ‘If you want to turn pro, you should turn pro.’ He turned pro, and it’s incredible, what he’s done.” Higgo, who turned 22 this month, has won three times on the European Tour. This PGA Championship is his first major.

Branden Grace is playing in his 34th major this week. He’s 33. Do you know how good you have to be to have played in that many majors at that age? At the Open at Birkdale in 2017, when Jordan Spieth won, Grace shot a third-round 62, the lowest score ever recorded in a major.

“A lot of us Afrikaners, we love being outdoors, so we’re drawn to golf,” Els said. “We’re like the Texans that way. A lot of us didn’t speak English that well at first, but we’re not big talkers, so golf suited us that way, too, when we played in junior tournaments.

“And we’re a very competitive tribe. We’re going to give it everything we have. I have a friend who is a retired Navy Seal. He says, ‘You guys have the same kind of fighting spirit that the Navy Seals have. You’re going to give it your all on the field, and fight like hell, and then when you’re done, you’ll come off the field as friends.”

Els knew the life story of every South African player in the field. Needless to say, the players know each other as well. That’s one of the reasons Els uses the word tribe. Get used to the newish South African flag, in all its boldness, at golf tournaments for a long time to come. As a tribe, these golfers are going to be clogging up leaderboards for a long time to come. That’s what Ernie says, and he would likely know. For further proof, check out the scores this week from Kiawah.