2021 PGA Championship cut: These stars will not be playing on the weekend 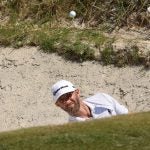 Dustin Johnson hits out of the sand on Friday on the 9th hole at the Ocean Course at Kiawah Island.

“It just requires you to do everything well,” he said. “You’ve got to drive it good. Driving is definitely a big part of it. You’ve got to hit the fairways. They are fairly generous, but with the winds the way they are and a lot of crosswinds and into-the-wind holes, you know, and the way the holes are angled, you’ve got to hit good drives to get it in the fairway.

“And then obviously from there, doesn’t get a whole lot easier.”

Narrator voice: It did not.

Johnson, after rounds of four-over 76 and two-over 74, was among the notable players to miss the 36-hole cut at this year’s second major. The cut was five over, which included the top 70 players and ties. After his missed cut at the Masters last month, Johnson becomes the first world No. 1 not to make the weekend in consecutive majors since Greg Norman in 1997.

Among the 75 players who did not make the cut:

Johnson (six over): Johnson, after double-bogeying the 18th on Thursday, birdied his first hole, the 10th on Friday. And he birdied his last on a 13-footer. But he could not overcome four bogeys and a double bogey in between. (Johnson also eagled the par-5 7th.)

Justin Thomas (six over): Thomas made a spirited run to try to make the cut as he birdied the 17th on a 37-foot putt, then narrowly missed a putt from off the green on the 18th.

Xander Schauffele (six over): On Friday, Schauffele shot a back-nine 40, with a bogey on the 18th, where he hit his approach left of the green, then hit his third across it.

Sergio Garcia (six over): Garcia, playing in the same group as Johnson, could not overcome a five-over 77 in the first round. On Friday, he also bogeyed the 7th as Johnson eagled it.

Tommy Fleetwood (seven over): Fleetwood played holes 1 through 6, part of his second nine on Friday, at four over.

Matt Kuchar (10 over): Kuchar shot identical rounds of 38-39 and made just one birdie between them.

Cam Champ (15 over): Champ could not overcome an opening 82, where he made three double bogeys.

18 of the 20 club professionals: Brad Marek (two over) and Ben Cook (five over) made the cut.

Among the players who made the cut on the number were Patrick Reed, Jason Day, Webb Simpson, Billy Horschel, Henrik Stenson, Harold Varner III and Garrick Higgo.