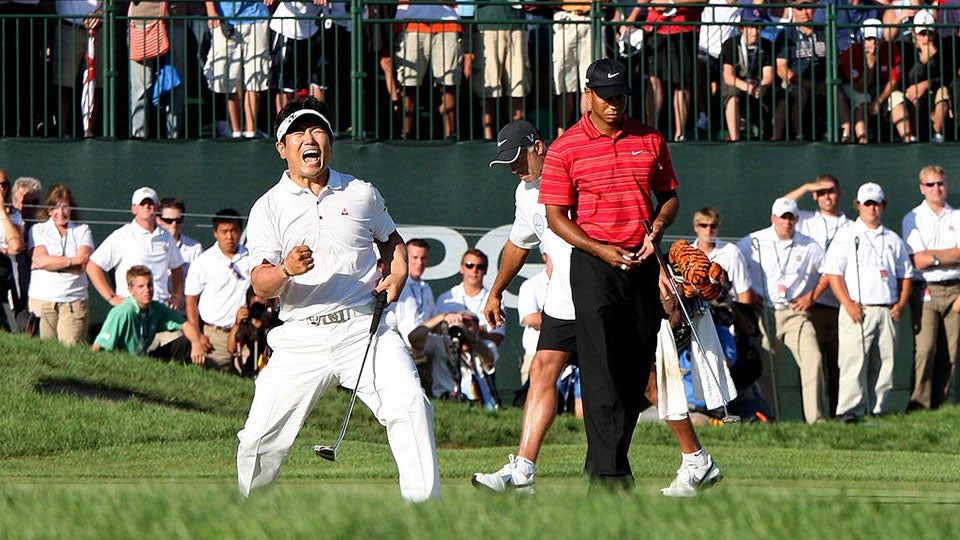 Y.E. Yang of South Korea celebrates a birdie putt on the 18th green alongside Tiger Woods during the final round of the 91st PGA Championship at Hazeltine National Golf Club on August 16, 2009 in Chaska, Minnesota.
David Cannon/Getty Images

If you were the type of guy who put money on Buster Douglas to beat Mike Tyson, or Jack Fleck to beat Ben Hogan, or Bambi to maul Godzilla, then you might have put money on Y.E. Yang to upend Tiger Woods.

But people would’ve said you were nuts.

One guy, Yang, was ranked 110th in the world, had done a hitch in the South Korean military, and had been anonymous in America until he’d won that year’s Honda Classic. The other guy was No. 1 Woods, who already had hoisted the Wanamaker Trophy four times, was 14 of 14 at closing out majors when he had at least a share of the lead, and held a two-shot cushion over Yang and Paddy Harrington through 54 holes at Hazeltine.

“It was a terrible day on the greens at the wrong time,” Woods said after taking 33 putts. Perhaps he was distracted. He was, after all, only three months from crashing his Escalade into a fire hydrant, touching off the most frenzied tabloid sex scandal in the history of golf and perhaps all of sports.

But give credit to Yang. His pitch-and-run eagle at the par-4 14th hole swung the day in his favor, and he zealously guarded the lead with his clutch hybrid shot to 10 feet at the 18th hole. At 37, he’d put together the greatest round of his career, and he shot 70 to Woods’s pitiful 75.

“This might be my last win as a golfer,” Yang said through an interpreter. “But it sure is a great day. It means the world right now.”