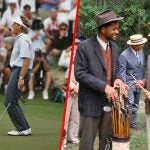 The wild history of golf at Kiawah Island.

The Ocean Course at Kiawah Island is prepared to host another significant event on the golf schedule this week: the 2021 PGA Championship. But the resort course — nestled along the Atlantic Ocean near Hilton Head, S.C. — has a shocking amount of history for a course of its age.

Before the opening tee shots in the second major of the 2021 golf season, let’s take a look back at some of the greatest moments you might have forgotten from over the years at Kiawah.

Some 2,492 miles from Hollywood, Kiawah made its mark on the silver screen before it ever hosted a major championship.

The course was one of several used to film scenes for “The Legend of Bagger Vance,” the 2000 Dreamworks/20th Century Fox film featuring Will Smith, Charlize Theron and Matt Damon. Sadly, no three-way ties will close out this year’s event at Kiawah.

2. It hosted the hardest PGA Championship round *ever* in 2012

On Friday, gale force winds blew in off the Atlantic and wreaked havoc all afternoon, sending scores skyrocketing. On Kiawah’s par-72 layout, the scoring average for the second round was a shade over 78, the highest in a single round since strokeplay was adopted at the PGA in 1958.

Carl Pettersson entered that fateful Friday with the lead, and his two-over 74 was enough to maintain it heading into the weekend.

The Ocean Course hosted perhaps the most memorable Ryder Cup of the last three decades — the 1991 ‘War at the Shore.’ While the tournament famously featured as much gamesmanship and heated rivalry as any Ryder Cup in history, the scene on the 18th green remains alone in Kiawah lore.

It was on this putting surface that Bernhard Langer missed a six-foot putt, swinging his Sunday singles match from 1-up to even and giving the United States the half-point they needed to win the Ryder Cup. Langer’s miss cemented the Americans’ first Ryder Cup win in eight years, 14 1/2 to 13 1/2.

4. The course’s most beautiful vistas didn’t come from its architect

Though her husband’s name rose to more noticeable acclaim in the design community, Alice’s architectural tastes formed many of the most important aspects in her husband’s designs, and helped to earn her the title of the “First Lady” of golf course architecture in the United States.

5. Shell’s Wonderful World of Golf once featured a fitting match

For close to a half-century between 1961 and 2003, “Shell’s Wonderful World of Golf” helped showcase many of the finest golf courses on the planet to millions of fans viewing from home. And on the back end of that stretch, in 1996, the show welcomed Annika Sorenstam and Dottie Pepper for a match of their own.

Pepper won the match, shooting 77 to Sorenstam’s 75, admitting afterward that she was skeptical about the course’s ability to fairly host a strokeplay event.

“If the wind blows, it would have to be a tournament with marshal’s galore,” she said, as documented in the book “South Carolina Golf.” “You would have to have a setup so you would have morning and afternoon starts to even out the wind for all the players.”