This is the ‘golden secret’ behind Lexi Thompson’s power 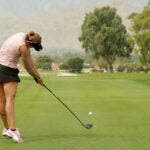 Lexi Thompson hits a tee shot during the third round of the ANA Inspiration last Saturday.

Lexi Thompson whipped her driver back and whipped it forward. She then held it behind her head as part of her follow through. She cast it forward with both her arms and held it high before sliding it through her hands to the ground. Thompson needed to hang around the tee box Saturday at Mission Hills Country Club. Her ball was still hanging in the air.

Thompson averaged 304 yards off the tee over the four rounds at last week’s ANA Inspiration, sixth in the field. She played 16 par-5s over those rounds and made 10 birdies. She’s eighth on the LPGA Tour this season in driving distance, with an average of 271.6 yards. She’s long.

“Lexi is known for her tremendous distance off the tee and her clubhead speed,” said LPGA Top 50 Instructor Maria Palozola on a recent LPGA Tour instruction video. “With this driver, Lexi creates a whopping 106 mph, and on average, with roll, that will give her around 277 yards. Now ladies, that’s amazing.”

Palozola said Thompson’s swing is, too. She broke it down.

On her backswing, Palozola said, “you’re going to see wide arms, a huge takeaway and a tremendous amount of shoulder turn. In fact, she turns past where most players go, which is 90 degrees. Big high arc here. All these things are good, key factors for speed.”

Her “golden secret” is the biggest one.

At impact, Thompson is “going to explode with those legs and hips off the ground –  that’s what we call ground-force reaction,” Palozola said. Immediately after impact, Thompson stands slightly on her toes, and her left foot slides backward.

“So the first thing she does, she torques those hips out and then she pushes up off the ground and that’s going to throw her arms out,” Palozola said. “You can see how extended her arms are, creating a tremendous amount of speed.”

Palozola said the swing can be duplicated.

And perhaps the distance can be, too.

“So ladies, your secret, your key here is to get those hips moving first on your downswing,” Palozola said. “So when you get up to the top of the backswing, first thing you’re going to want to do, get those hips moving, get them moving ahead of the shoulders, allow that to let you lag the club behind and create all that energy that you’re then going to release into the golf ball. Good luck.”