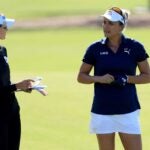 Nelly Korda, left, and Lexi Thompson during the fourth round of the Pelican Women's Championship.

Check in every week for the unfiltered opinions of our writers and editors as they break down the hottest topics in the sport, and join the conversation by tweeting us @golf_com. This week, we discuss a dramatic finish on the LPGA Tour, a shocking contender on the PGA Tour, and another win for Phil Mickelson on the senior circuit.

1. In a wild LPGA finish, world No. 1 Nelly Korda won the Pelican Women’s Championship by birdieing the first playoff hole (eliminating Lexi Thompson, Lydia Ko and Sei Young Kim), after much turbulence down the stretch in regulation. What’s the bigger storyline: Korda’s continued excellence, despite a triple-bogey on the 71st hole (it was her fourth win of the year, and fifth counting the Olympics); Lexi’s continued shakiness when in contention (she missed short-ish putts on the last three holes, this coming five months after she was unable to convert a five-shot fourth-round lead at the Women’s U.S. Open); or Lydia Ko’s continued resurgence? (Write-in votes also accepted!)

Michael Bamberger, senior writer: Quite interesting choices! I would say Ko’s resurgence. Korda’s golf is excellent, superior in almost every way, and one poorly-timed triple doesn’t change anything. Lexi smashes her golf ball and short-putts poorly, so there’s nothing new there, really. But finding your game after losing your game is close to impossible. I’m voting for Lydia here.

Josh Sens, senior writer (@JoshSens): If we’re defining ‘bigger’ as ‘most unlikely,’ I’m with Michael. What Ko has done — pulling her game out of a death spiral — is a rare feat, and it’s been great to watch. But Ko has been playing great golf for a good stretch now. Korda has become so dominant, her wins have taken on an air of inevitability. That leaves Lexi’s story as the most notable story, to my mind. And the most relatable. Watching a world-class golf battle demons is compelling, even if it sometimes makes you squirm.

Josh Berhow, managing editor (@Josh_Berhow): Good options, indeed. But it’s gotta be Korda. The last time an American women’s golfer won four times in an LPGA season was a decade ago, when Stacy Lewis did it. And Korda even added an Olympic gold for good measure! It’s no secret she’s a special talent, but to see her fully take the reins as the top player in the women’s game has been pretty fun. And I was even more impressed by Korda’s resilience. Lexi struggled to close. Nelly made a triple and then followed it with birdie (to join the playoff) and then another (to win).

Nick Piastowski, senior editor (@nickpia): I’m going with Korda, but more for her finish, as Berhow mentioned. Birdie-birdie to end it — after a triple bogey? That’s something special. That steadfastness is certainly one of the reasons why she has won the way she has this year. But we also can’t ignore that all of these fantastic storylines were relegated to tape delay on Golf Channel. I’m not a TV guy, and I know that there are contractual obligations, but man, you’d figure there’d be some way to squeeze in the biggest names in women’s golf.

2. On the PGA Tour, Martin Trainer started the week at a whopping 2,000-1 odds to win the Houston Open, only to open with back-to-back rounds of 65 and lead on the weekend, before coming up four strokes shy of winner Jason Kokrak, in a tie for fifth. Before this week, Trainer had made just one cut since April. Where does Trainer’s run rank among Tour underdog stories in recent memory?

Bamberger: His career is not at the Jim Herman-level for overall oddness, but it’s close, pretty, pretty close.

Sens: Herman was the first to come to mind. But going back a bit further, was there anyone on the planet who expected Ted Potter Jr. to win at Pebble, with DJ among the gang there with him? Prolly no one other than Potter.

Piastowski: Way up there. It kinda reminds me a little of Matt Gogel, who stared down Tiger at the AT&T Pebble Beach Pro-Am in 2002 — at the height of Tiger’s powers — then never won again. Those times when it actually does all come together — or at least the thought of them — are what keep us coming back.

Berhow: He ranked second-to-last in Strokes Gained: Tee to Green last season, yet was 38th in Houston. Also, he made a ton of putts. It’s a great story and fun to see him find it. Golf is a weird game. This one ranks up there among the unexpected and would have been even more so had he won.

3. For the third round in Houston, officials moved up the tees on the dogleg-right, par-4 17th some 75 yards — to 301 yards — giving players the option of either laying up, hitting left of the green or going for it. The setup led to eagles and double bogeys, including a double from leader Matthew Wolff, who was leading at the time and teed off on 17 with a wedge. Would you like to see more drastic tee-altering on Tour to keep players on their toes, or was this a setup step too far?

Bamberger: No, I think it adds to the test, tests another dimension, the player’s mental flexibility. I applaud it. But 301 is too short. That’s a long par-3.

Sens: More strategic decisions, risks and rewards. More better. Anything to break up the monotony of the bomb-and-gouge fest that too many events have become.

Piastowski: Love it, love it, love it. Decision-making — instead of going driver-wedge, like Sens said — and a little carnage are fun theater.

4. On the PGA Tour Champions, Phil Mickelson won the season finale, the Charles Schwab Cup Championship (and 64-year-old Bernhard Langer won the season-long points race for the sixth time). The win was Mickelson’s fourth in just six Champions starts in 2021. What does Phil’s dominance on the senior circuit tell you about what kind of threat he could still be on the PGA Tour?

Bamberger: Not much. It tells you about the nature of the courses they play on the senior tour, compared to the regular tour. No rough, accessible pins. I got religion on this subject years ago, when Langer won a senior event on the eve of the Masters. His play had been dominant. I asked Craig Stadler what his senior play would mean for top-10’ing or whatever at Augusta; was there any relationship between what he had done on a short, simple Florida course and what he might do at Augusta. None whatsoever, said Stadler, in language more colorful than that.

Sens: Apples/oranges. What tells us the kind of threat Phil could still be is the fact that he won the PGA at Kiawah. The senior wins are padding for his bank account.

Berhow: It wasn’t that long ago when Mickelson made pretty clear (many times) that he had no intention to play on the Champions Tour, so to see him do it now and be as successful as he has is pretty cool. I think two things can be true — these setups favor a game like Mickelson’s, and Phil still has plenty of game. As for his PGA Tour prospects, I don’t think it changes much. When a course suits him and he has a good week, he can do special things. It won’t be consistent, but he can still find it.

Piastowski: I agree with all of the above, but winning also builds confidence, and I think Phil’s early success on the Champions played some role in him winning at the PGA. Win a few times, and you begin to think you can conquer the world, and that’s Lefty did at the end of May.

5. The European Tour announced this week that under a partnership with UAE-based logistics company DP World, it will increase its overall purse money in 2022 to $200 million, or roughly twice as much as players vied for in 2021, with a minimum purse of $2 million for each event. In addition, the tour will be rebranded as the DP World Tour. The cash infusion comes amid an arms race that is raging in pro golf, driven by threats of rival circuits baiting away the game’s best players with huge guaranteed paydays. What do you make of this latest move on the gilded chess board?

Bamberger: That when you can spend your money as you please, when you don’t have to be responsible to a board and to shareholders, that $200 million is nothing to get up-and-close with a great tool of capitalism, professional golf.

Sens: That competition shakes things up. And that watching this particular brand of it unfold is a bit like watching Succession — the main characters already have plenty of money, and not all of them are easy to root for.

Berhow: I can’t wait to see what pro golf looks like in three years. It’s the Wild West right now as leagues are trying to gain momentum and bring in big names. So much, or so little, could happen.

Piastowski: It’s great to be a pro golfer right now. But as I’ve mentioned here a few times, it might not be so great to be a fan should the stars get divided among tours. The best events are when the players are there. All of them.

6. On Tuesday, GOLF will reveal its Top 100 Courses in the World list. Ahead of the announcement, and as the year winds down, what’s the best course you played in 2021 that you had never played before?

Bamberger: Pine Valley, National Golf LInks, the Tillinghast course of the Philadelphia Cricket Club, among others. I have played those three courses many times, in actual fact. But I take the view that every time you play a course, it’s as if you are playing it for the first time, because the course is not precisely the same as it was any other time you were there — and neither are you. Also, I can’t think of a course I played in ’21 that I had never played before.

Sens: I didn’t get to as many places as I would have liked this past year, but even if I had, I’m not sure any course would have topped Lawsonia Links in Wisconsin. A revived Langford-Moreau design that is going to be even better when they finish the bunker work they’ve got going. Big, dramatic features. Tons of variety. Best of all, it’s public and bargain-priced. It’s a must.

Berhow: I played Pinehurst No. 2 a week ago (or at least 13 holes of it), so that’s a pretty easy pick. I heard the greens were maddening but really didn’t understand just how maddening they were until I was greenside in two on the first hole and made seven. Definitely maddening. Honorable mention: Lawsonia Links (absurd value) and White Bear Yacht Club (superb logo; also great golf course).

Piastowski: I played both Bandon and Sand Valley for the first time this year, and while those both are at the top of the list, I also wanted to mention here a gem I played during the summer. Rock Spring Golf Club in eastern New Jersey was 80 bucks with a cart, had a great restaurant — and is one of only two public courses in the U.S. designed by the famed Seth Raynor. It was really good.