Why this pro thinks you shouldn’t hit the driving range 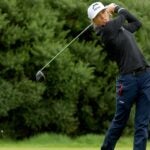 During the pause of the 2020 season, Mel Reid not only learned to love golf again, but she also discovered a practice routine for success.

Mel Reid calls the 2020 pause to the LPGA season because of the Covid-19 pandemic the “best thing that ever happened to [her] career.”

As a high-level golfer since her early teens, Reid had not spent more than three straight weeks in her own bed since she was 14. The grind of pro golf had her feeling run down and, at times, seriously considering retirement.

Then Covid hit, and players headed to their homes to await further instructions. For Reid, that meant retreating to her home in Jupiter, Fla. for a much-needed reset.

“It really did rebirth my career,” she said. “It gave me time at home and a bit of breathing space to find the love of the game again.”

Reid expected she’d go home and put the clubs away for a few months so she could decompress and get away from the trappings of pro golf. She could only last a few days before she was itching to get back out on the course.

One of the benefits of living in a golf mecca like Jupiter is the abundance of Tour pros who live in the same vicinity. For Reid, a member at Floridian National Golf Club, her time in south Florida during the pandemic was spent on the course with other pros looking to occupy their time during the shutdown.

While at home, pros such as Brooks Koepka, Rory McIlroy and Rickie Fowler helped Reid not only keep her game sharp, but allowed her to study the game of those who’ve seen success at the highest level. When Reid was in contention early at this summer’s U.S. Women’s Open, she said she wanted to “be like Brooks” as she looked for her first major title.

But a major-winning ethos was not the only thing Reid picked up from her PGA Tour buddies during her time in south Florida. She also learned some valuable lessons about how to practice. Or rather, how to not practice.

Instead of beating balls on the driving range for hours on end, Reid used her time off to play as much as possible, much like she saw Koepka and others do.

“They do a little bit of technical work, get it feeling half decent and then they go test it out on the golf course,” Reid said. “You’re never going to hit 150 7-irons from a perfect lie.”

Reid said she’s seen far too many players spend too much time on the driving range learning how to dial in their shots under perfect conditions, but as a result they don’t know how to play the shots they’ll need on the course.

The learning appears to have paid off for Reid. After the resumption of the LPGA season last summer, she finally broke through for her first-career victory at the ShopRite LPGA Classic, and she just qualified for her fourth Solheim Cup team.

“There’s a time and place for a driving range,” she said. “But I think once you get to a certain level, playing is more beneficial than practicing.”

Does your bag need an overhaul? Visit the expert fitters at our affiliate company, True Spec Golf.