What makes Europe thrive in team events? This pro has a theory 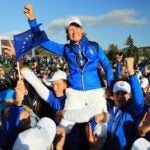 Despite being underdogs in many Solheim Cups and Ryder Cups, Europe has thrived.

By most statistical metrics, the U.S. is the heavy favorite in this week’s Solheim Cup.

After losing in a stunning upset two years ago at Gleneagles, the Americans are poised to retake the cup at Inverness Club. And on paper, things look quite good for the Yanks. Led by world No. 1 Nelly Korda, the U.S. has an average world rank 18 spots higher than their opponents.

But the Solheim Cup isn’t played on paper, and if the Americans want to reclaim the Cup, they’ll need to bring their A-game. Playing the role of the underdog is nothing new for the Europeans, and it’s a position they are quite comfortable operating from — Europe has won three of the last five iterations of the Solheim Cup.

It’s no secret that the Americans have had a tough time finding the right formula when it comes to team events like the Solheim Cup and Ryder Cup. The USA is just 6-5 in the Solheim Cup — and a putrid 2-7 in the Ryder Cup — this millennium.

But what is it that makes the Europeans able to play the role of David so well? According to Solheim Cup veteran Mel Reid, it all comes down to team building.

“Because we’re so much smaller, I feel that we do have an easier time throwing egos out the door,” Reid said. “We have to. We’re never stronger on paper than the Americans. The only way we can really win these things is if we come together and make the bond of a team our asset.”

The inability to come together in a proper team atmosphere is something that has plagued the Americans over the last two decades as the Europeans have bullied them in team competitions, particularly in the Ryder Cup. The Ryder Cup Task Force was born in direct response to this issue, but they still haven’t cracked the code.

The Europeans, on the other hand, have had little issue coming together every two years — and their record reflects that.

“I think we do that so well in Solheim and Ryder Cups,” Reid said. “The European teams do just bond together better than the U.S. teams. I think that’s why we’ve been so successful in Ryder Cup and Solheim Cups.”