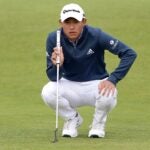 Collin Morikawa's tweaks to his putter played a big role in his Open Championship win.

Paul Azinger called it “some of the best clutch putting we’ve ever seen” during the NBC Broadcast. Even Collin Morikawa admitted it was “definitely one of the best, especially inside 10 feet.”

Morikawa’s victory at the 149th Open Championship was a not so gentle reminder that a bombed drive can get you closer to the hole — but it won’t get you in the hole in the fewest possible shots. The putter still plays a vital role, especially if you have major championship aspirations.

If you’re lucky enough to have a trusty putter, you ride the good vibes like a gambler on a heater at the craps table. And when things aren’t going so hot, you make a few adjustments. In Morikawa’s case — he entered the Open Championship 172nd on Tour in SG: Putting — that meant employing two different grips and making a minor adjustment to handle the slower-than-normal greens.

Following a week in Scotland where he failed to get the ball to the hole, Morikawa utilized the adjustable heel-toe weights in the sole of his TaylorMade TP Juno putter and added some beef to the head, replacing the two 2.5-gram weights with 7.5-gram weights to add an extra 10 grams.

Prior to adjustable head weights entering the equipment space, there was some guesswork involved when it came to increasing the overall head weight of the putter.

Lead tape (a common sight on Tiger Woods’ putter at The Open) could be added to the head to get the ball rolling. A digital scale could get the head weight just right, but it still took time to cut the strips and figure out the proper placement. (Even Woods finally relented and briefly went to an adjustable version in 2019.)

The minor head weight adjustment was quick, painless and provided the necessary beef to get Morikawa’s putter back on track.

Maybe it’s pure happenstance, but there’s something about the Open Championship that leads Jordan Spieth to shake up his irons. Back in 2019, Spieth switched to Titleist T100 at Royal Portrush and finished T20 in his first start with the new sticks. He improved upon the performance last week with the latest version of T100 that officially went into play at Royal St. George’s.

“I don’t understand why you’d play any other iron, to be honest,” Spieth said. “I joke around, ‘I’m not good enough to play the blades,’ but in reality, I think we’re just being smarter. I think we’re just like, ‘Oh, we can actually hit every shot that a blade can hit.’ But that chance that we mis-hit them – which we’re going to mis-hit a few shots in a round, even in a great round, the idea that it does carry that bunker and you make birdie on a hole where someone has to get up and down for par – I mean, it could be the difference in a tournament.”

The iron switch wasn’t a case of making a last-minute gear change to find a spark. Spieth first laid eyes on the final prototypes during a Titleist photo shoot back in May.

“First thing you noticed is how they look, kind of the backside of the iron,” Spieth said. “You could see the color just kind of more matted out, and then a really clean back to it. Just very simple – stays looking almost like a blade with the forgiveness of a cavity back.”

Spieth was instrumental in the development of the irons and spent the last few weeks leading up to the Open Championship dialing them in at home prior to departing for England.

“When we first introduced the new T100’s to Jordan in Dallas, he commented immediately on the look and feel, how well they went through the turf, and how consistently they were flying,” said Titleist Tour rep J.J. Van Wezenbeeck. “Talking with him last week, as he was working through the set, he said his ball speeds were extremely consistent, and he was really happy from a visual standpoint.”

Spieth didn’t skip a beat with the new irons as he made a charge on Sunday afternoon that ultimately came up short. Expect the new irons to be in the bag for the long haul.

Adam Scott made a number of changes to his setup at Royal St. George’s, including going back to Titleist TSi4 — he had been using TSi2 — and the Graphite Design Tour AD DI-8X shaft he used to win the 2013 Masters to achieve a lower, right-to-left shot shape and consistency.

Of course, switching drivers takes a backseat when you add two of the same club to the bag. Instead of simply adding one Titleist T100 3-iron at the Open Championship, Scott opted to put two in play.

Working with Titleist Tour rep Liam McDougall, Scott found a T100 3-iron built at 2-iron loft and length consistently went through the firm turf without any issues. To fill the 3-iron gap in his bag, Scott opted for a standard T100 3-iron.

“With the new T100’s, the way the sole goes through the links turf was very favorable to Adam’s delivery and flight requirements,” said Titleist European Tour rep Liam McDougall.

This isn’t the first time a pro has carried two irons with the same number stamped on the head. Back in 2018, Cameron Champ did something similar with Ping i500 and iBlade 4-irons.

The move to a links-style layout saw plenty of players make changes to adjust for the course conditions. Arguably the most popular gear change was the addition of a utility iron to flight it off the tee. Jon Rahm was of those players in the field who chose to remove his Callaway Epic Speed Sub Zero Triple Diamond T 5-wood and replace it with a 22-degree X Forged UT (Project X 6.5 shaft).

Rahm used the club on numerous occasions during the tournament week on the way to a T3 showing. The X Forged UT has a similar look to Rahm’s Apex TCB irons, which made the one-week swap even easier.

A peek at the future

Mizuno once again used the Open Championship to tease some products in the pipeline, including new Pro 221, 223 and 225 irons that were put in play by major winner Justin Rose. According to GOLF senior equipment editor Andrew Tursky, the “hosel of the Mizuno Pro 221 irons reads, “GF Forged HD 1025E,” surmising based on past Mizuno releases, those letters and numbers would stand for “Grain Flow Forged High Density 1025E.”

“Grain Flow” refers to Mizuno’s forging process that ensures the grains in the metals of the iron heads flow in a particular direction for better precision and feel. As for “1025E,” that likely refers to the type of material the heads are made from; 1025E is a type of high-density carbon.