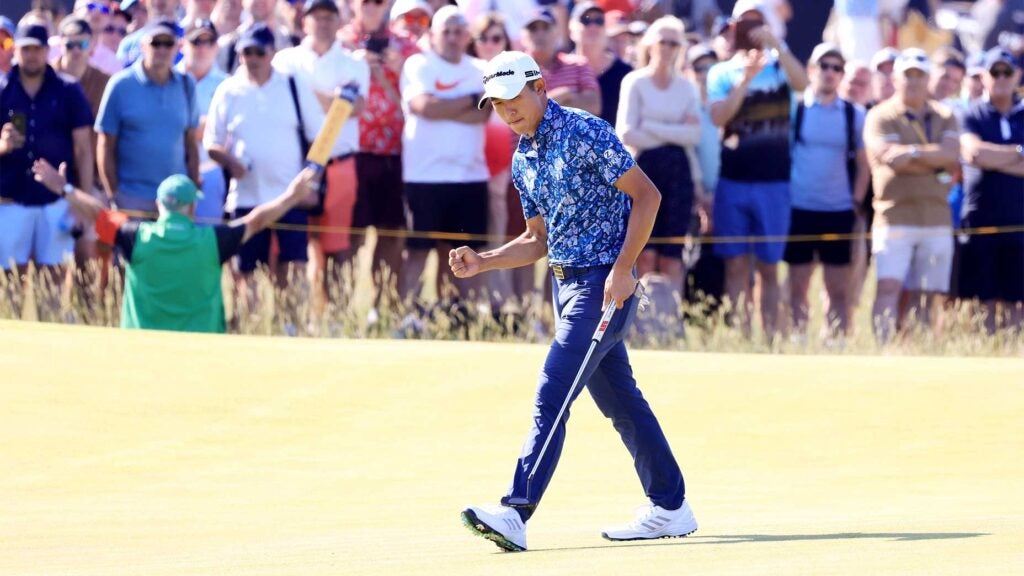 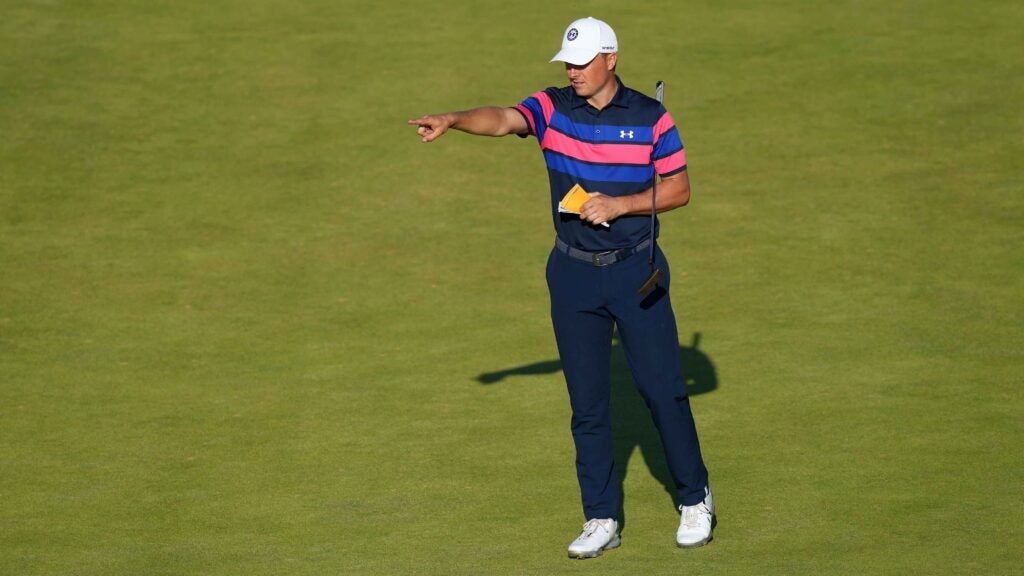 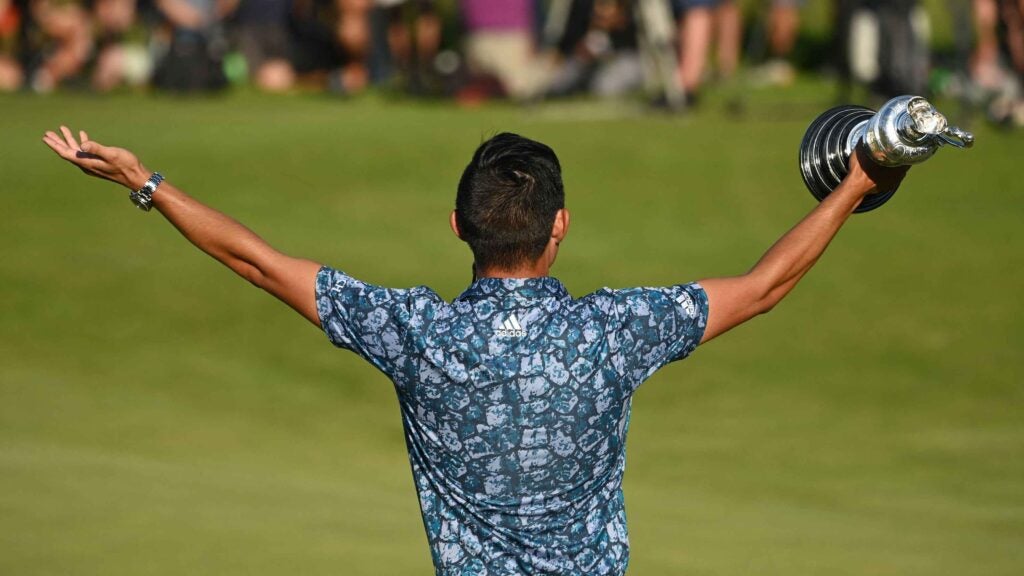 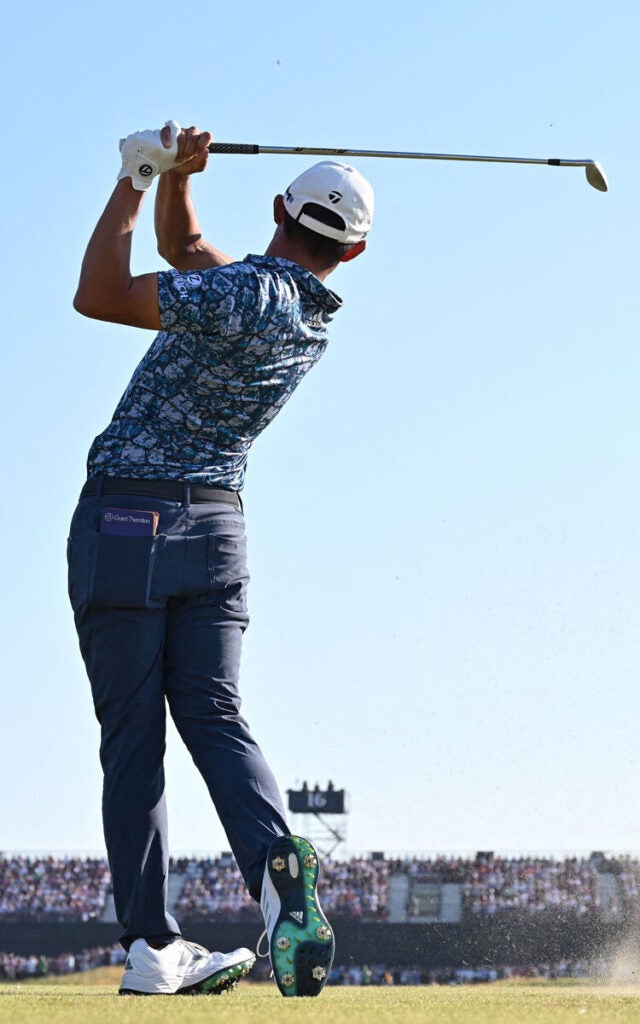 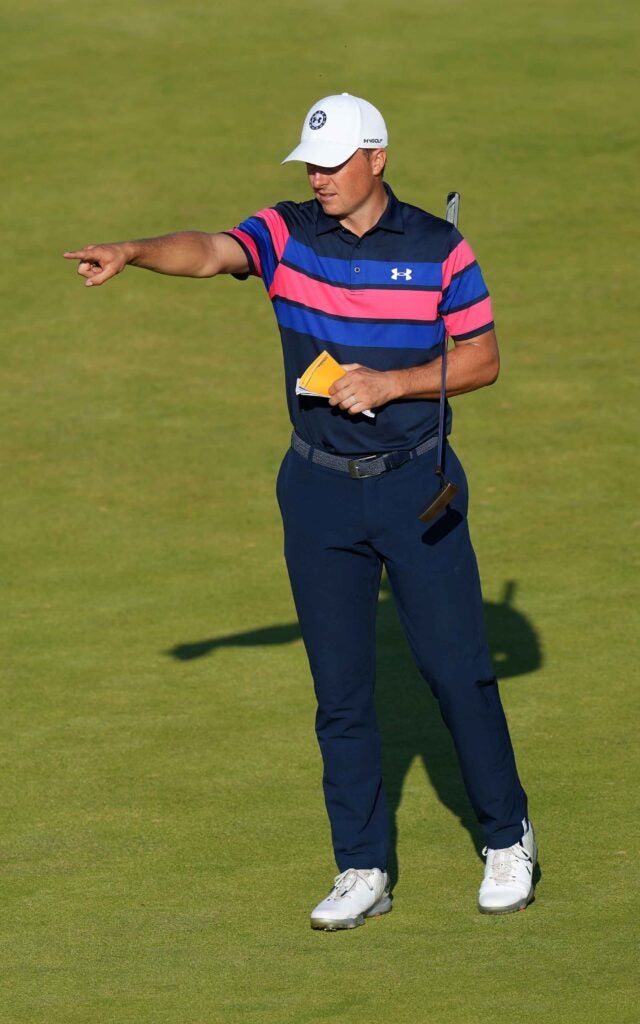 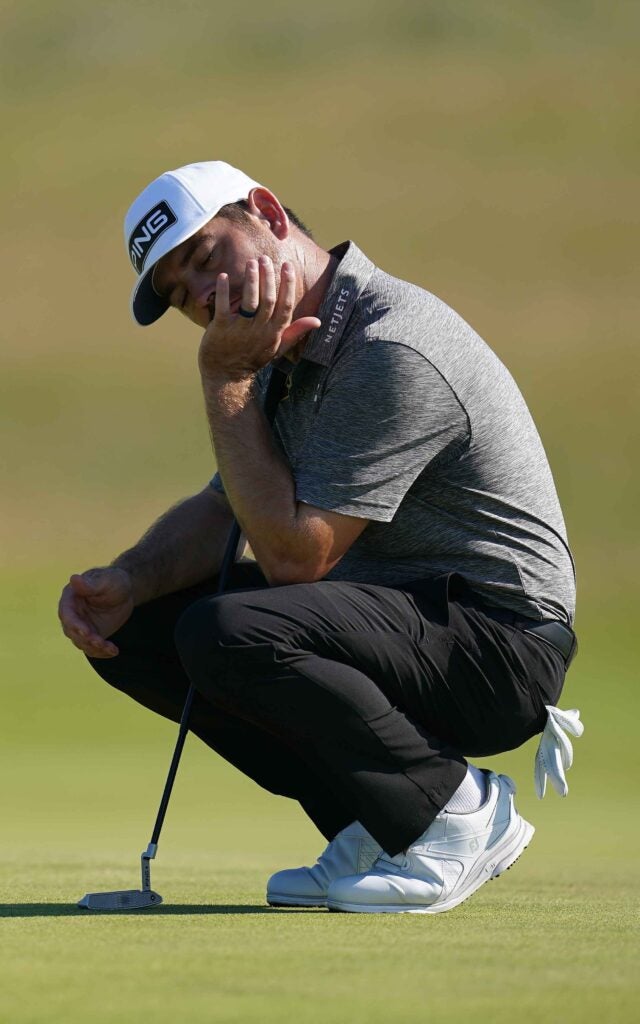 Collin Morikawa closed with a four-under 66 Sunday to win by two.

How was your Sunday? Maybe you were one of the 30,000 there, at Royal St. George’s. (Lucky you.) More likely, and like us, RSG came to you through TV magic. Coastal England, funny-bounce golf, for evil and for good. The breeze down, the sun out. Greens as slow as your shower mat. Ye olde jug, etched with all those famous names, waiting for someone to come on home. Blokes you could root for, up and down the yellow board.

Yes, a win at the Masters gets you in the club forever, and that’s neat. Yes, the U.S. Open, at least by tradition, is the most demanding of the golf’s Grand Slam events. But the British Open, the Open Championship — The Open! — percolates grandeur. No matter the weather, the venue, the leaderboard.

Jordan Spieth was in the penultimate twosome. After the missed shorty at the end of his Saturday, a l-o-n-g wait, to “on the tee, from the U.S.A.” and his 2:25 p.m. start. Then the final twosome 10 minutes later: Collin Morikawa, two shots ahead of Spieth, and Louis Oosthuizen, your 54-hole leader, a shot ahead of Morikawa.

Oosthuizen, the Sunday morning leader last month at the U.S. Open at Torrey Pines, was looking for his first major-tour win since his seven-shot victory at the 2010 Open at St. Andrews. Yes, no matter how many times you say it, it doesn’t seem possible.

Morikawa won last year’s PGA Championship at Harding Park, his first Grand Slam win. He’s 24. And if he could win a second major at that age? He’d be in another conversation — he’d be living life, at least his public, professional life, at another level.

As for Spieth — we know you were rooting for him. His root-for-me numbers are off-the-charts. Four long years ago, he was on the mountaintop. Sunday, July 23, 2017: the memorable day when he won the Open from Royal Birkdale’s dunes. It was his third Grand Slam title, along with a Masters and a U.S. Open. And then he slid on down, talking all the while. The champ became the underdog.

But that’s not why we were pulling for him on Sunday. You were rooting for him as you might have rooted for Phil Mickelson or Arnold Palmer, because he, like them, looks like he has no real plan. And we can relate. Most of us have no idea what we’re doing.

OK, on the basis of those bio blurbs, the winner all-along had to be —

Before we get there, one necessary observation from the BarcaLounger:

As for Spieth — we know you were rooting for him. His root-for-me numbers are off-the-charts. 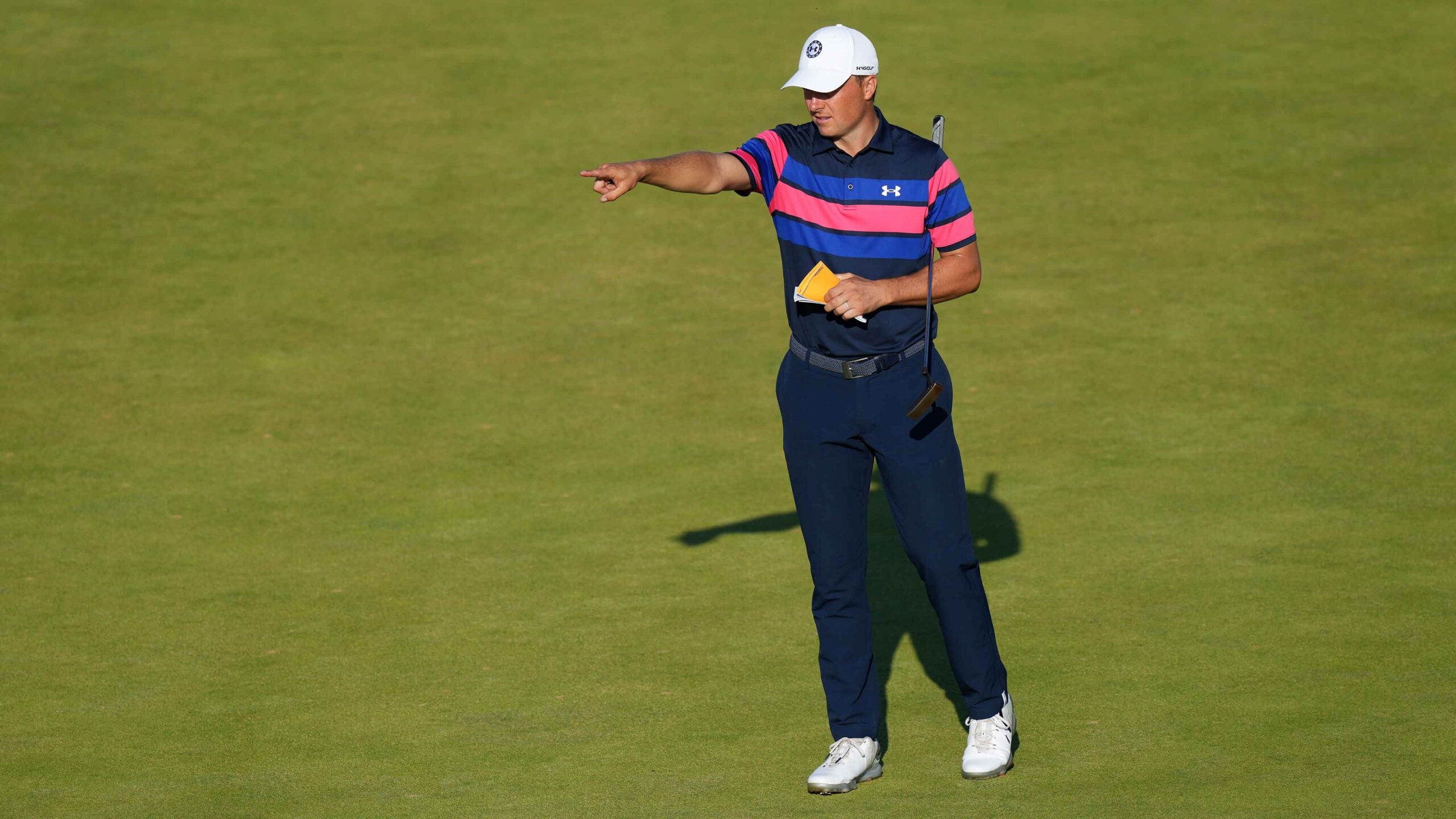 Tiger, in his prime, would have won this 149th Open by a field goal, if not more. Nicklaus, in his, would have won by one — because he had to contend with Tom Watson and Lee Trevino and others who knew how to hit some club in play off the tee, how to hit an iron hole high, how to hit a lag putt firmly enough to get it to the hole.

That formula sponsored by LinksGolf, your source for this-is-how-we-do-it golf since 1860 (Willie Park over Old Tom by two).

Yes, easy to recite the recipe from the easy chair. As Padraig Harrington, two-time winner of this great event, says, “We’d all be much better players if we were able to talk about our golf rather than play it.” Chat’s cheap. A bunker shot over a wall of laminated slabs of sod takes talent, practice, effort, athleticism, trust, mechanics, intelligence. Sounds like a certain 2019 Cal grad, doesn’t it?

Still, this really should have been a Sunday owned by Oosthuizen, with his classic fairways-and-greens swing. At the end of the day, though, that’s not enough. At a major, you have to get your thinking game around both the mechanical problems golf presents, from start to finish, and the mental ones, too. Nicklaus and Woods owned both categories. And by half-seven Sunday night, British Summer Time, Collin Morikawa showed that he has those qualities, too.

He was playing in his first Open. He said upon arrival, in a Golf Channel interview and not in any way bragging, that he was there to win. Spieth came home in 32, and put heat on Morikawa all through the back nine. Morikawa hit it on the face, with every club, from his best club (driver) to his least good (putter). He didn’t need to do anything exceptional, so he didn’t. Paging Tiger.

It’s hard not to page Tiger, right here, right now. Morikawa has played in eight majors and has won two of them. Next month, he’ll play in the Olympics, in Japan, the country of his ancestors, representing the United States, the country of his birth. In September, he’ll represent the United States at the Ryder Cup. He’s doing the thing he wants to do. He’s playing professional golf. He’ll seek to get better and maybe he will. But he’s not going to reinvent the wheel to do it. He’s too smart for that.

The victory remarks, as the Champion Golfer of the year, like Willie Park and Ben Hogan and Jack Nicklaus and Tiger Woods before him, were a study in maturity. The nods to the spectators. To Matthias Schmid of Germany, the tournament’s low amateur. To the R&A staff, and the RSG staff. To his birthday-boy caddie, to his fellow pros, to his parents and brother and girlfriend. He’s 24. You almost can’t believe it. Jordan Spieth is 27 and you can.

Some of you will remember Tiger in his 20s. This guy is something like Tiger and nothing like Tiger. Morikawa is a smart, collected, athletic son of California. He’s not as strong as Tiger. He doesn’t have Tiger’s putting game. (Nobody, really, ever has.) He doesn’t seem to have Tiger’s smoldering intensity, or Tiger’s OCD tendencies for playing golf and practicing golf. He speaks of his internal life with an ease Tiger never could.

But he doesn’t live his life under a microscope. He and Spieth were picked up on a hot mic at the Players, talking the way kids do, and the moment came and went. Nothing Tiger ever does goes away. As Morikawa said at the trophy presentation, “I feel the love.” It seemed so simple, the way he said it, what he meant by it. What a gift that is, that feeling. He’s not playing golf looking for it. He’s playing golf because he loves it. It’s so obvious. He’s quiet, cool — a calm kid. But you were watching, wherever you were. You saw it. His inner-life was pulsating.