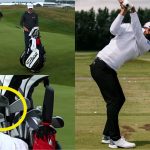 There’s so much that goes into preparing for a major championship, from both a physical and mental standpoint. Aside from the historical pressure alone, every major championship venue presents its own unique set of challenges, and players must prepare themselves properly.

That includes putting equipment in their bag that suits the course and playing conditions.

Ahead of the U.S. Open at Torrey Pines, for example, many players switched into high-lofted fairway woods to help battle the lengthy rough and long layout. Fairway wood and hybrids, compared to long irons or driving irons, offer greater forgiveness and higher launch to help golfers hit the ball high and far.

Typically, since the Open Championship is played on links-style courses that garner windier conditions, players opt for clubs that flight the ball lower to pierce the wind. Driving irons and long irons, therefore, are the usual weapons of choice at the Open rather than fairway woods or hybrids. When the wind is high, launching the ball into the air creates unpredictability.

Knowing this, a number of former major champions are making adjustments to their setups ahead of the 2021 Open Championship at Royal St. George’s Golf Club in England. Below, we dive into who’s making big changes, and discuss what they might be switching into this week.

Note: We will update this story with additional changes as we hear about them.

For the 2021 U.S. Open at Torrey Pines, Scott switched into a club setup that featured four metal woods, including a driver, 3-wood, 4-wood and 7-wood. This week at the Open Championship, though, Scott said in a press conference that he’s going in the complete opposite direction; he’s ditching most of his fairway woods for irons.

“The Open is a very different test than what we do week in and week out, so I have quite a different bag setup,” Scott said. “I’m using a 3-wood, which I don’t normally use, and then I’ve taken the 4-wood and the 7-wood out, which I do normally use, and I’ve put in a driving iron and a 3-iron is back in the bag, which I don’t normally use. I’ve taken one of my wedges out and — two wedges came out and replaced it with one in the middle because I feel like you don’t need to use all the loft when you’re at the Open. Certainly if it’s windy you don’t need to play the ball in the air; it’s not a priority. So I’ve got a very different bag setup this week.”

In addition to changing up his irons and wedges, Scott is making a driver change, too.

Last month, GOLF.com highlighted Scott’s switch to a Titleist TSi2 driver, which he equipped with a Fujikura Ventus Red shaft. Now, Scott says he’s switching back into a 430cc TSi4 driver head, equipped with a Graphite Design Tour AD-DI 8 shaft that he’s played in previous years. Most notably, Scott used that shaft when he won the 2013 Masters.

“The driver, coincidentally, I changed because I was driving it — I haven’t driven it well this year,” Scott said. “The stats clearly show that. It is normally a strong part of my game, and when it is good, it filters down through the bag. So I did some work with the guys at Titleist here in the U.K. when I arrived a couple of weeks ago, and they’ve got me squared away with a new driver, and I’m very happy about that. So I’m excited to drive it a bit better this week and try and keep it in the short grass.”

He continued: “It’s the TSi4 head, which I’ve used earlier this year. The shaft is — it’s basically the same shaft I was using when I won the Masters and the period before. I used that graphite design shaft for about four or five years back then, and certainly it’s like my comfort zone with a shaft, and nice kind of familiar feelings putting that back in.”

Throughout the earlier parts of his career, Spieth was known to be slow when it came to upgrading his iron set into new models. That was back when he was playing Titleist’s popular AP2 irons. Titleist’s T-series irons, which first came out in 2019, though, have been a bit different for Spieth.

Back in 2019, Spieth switched fairly quickly into T100 irons, first debuting the new-at-the-time designs at the 2019 Open Championship.

It seems Spieth is ready to upgrade again at the 2021 Open Championship. While the second-generation T100 irons haven’t even been released to the public yet, Spieth was spotted at the Open Championship with an all-new set in the bag. Clearly Spieth is already liking the new designs, even though we don’t yet have details on exactly what’s different about them.

Spieth is also reportedly testing a T200 2-iron at Royal St. George’s, which would presumably replace his U500 driving iron. The T200 iron heads, although unreleased, are likely to offer a bit more forgiveness and launch compared to the T100s.

Throughout 2021, Johnson has typically been using a club setup that includes a TaylorMade SIM Max 7-wood. At the Open Championship, however, Johnson was spotted testing a new TaylorMade 790 UDI driving iron, equipped with a Project X HZRDUS Smoke graphite shaft.

Will we see Johnson make the change into the new driving iron come Thursday? That remains to be seen, but judging by Scott’s tactics of going with long irons instead of fairway woods, it seems likely Johnson will make the switch, too.

As GOLF’s managing editor for equipment, Jonathan Wall, reported earlier this week, Thomas has already switched into a new Scotty Cameron Phantom X5 prototype putter. His equipment changes may not stop there, though.

On Monday at Royal St. George’s, Thomas, like Spieth, was spotted with an all-new Titleist T200 2-iron in the bag. Thomas usually opts for a 5-wood versus a long iron or a driving iron, so this would be a significant switch for Thomas.