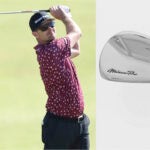 Justin Rose, currently an equipment free agent, has the freedom to play with any irons he chooses from week-to-week. It just so happens that this week at the 2021 Open Championship at Royal St. George’s Golf Club, Rose has decided to use never-before-seen Mizuno Pro 221 irons.

Earlier in the week, three new Mizuno irons popped up on the USGA Conforming List, including Mizuno Pro 221, 223 and 225 models.

Judging by the USGA black-and-white photos, it appears the Mizuno Pro 221 irons – Rose’s irons of choice at The Open – are most akin to traditional blade irons. The 223 irons appear to have cavity back designs, and the 225 models have “HMB” stamped on their hosels; in the past, HMB has stood for “Hot Metal Blade,” which were hollow-bodied long iron replacements.

On the hosel of the Mizuno Pro 221 irons, it reads, “GF Forged HD 1025E.” Surmising based on past Mizuno releases, those letters and numbers would stand for “Grain Flow Forged High Density 1025E.”

“Grain Flow” refers to Mizuno’s forging process that ensures the grains in the metals of the iron heads flow in a particular direction for better precision and feel. As for “1025E,” that likely refers to the type of material the heads are made from; 1025E is a type of high-density carbon.

What’s different about the Mizuno Pro 221 irons versus the MP-20 irons? It’s hard to tell exactly from the photos, but it appears the muscle pad in the back of the irons has a different look on the Pro 221s.

For now, it’s all speculation until Mizuno officially comments on the designs. The only things we know for sure right now are 1) the irons are USGA conforming, and 2) they’re in Rose’s bag as he contends to win The Open this week. Rose currently sits at T25 (three under par) through two rounds at Royal St. George’s.