Did Collin Morikawa give us one of the best putting performances ever? 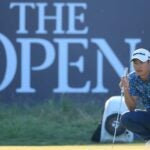 Collin Morikawa lines up a putt on Sunday on the 18th green at Royal St. George's.

Collin Morikawa, on the 18th at Royal St. George’s, hit his 25-foot birdie putt from past the hole, it tickled the right side and missed. Morikawa kicked up his leg. He winced.

When you don’t miss a putt of consequence for an entire day, at your first Open Championship, during its Sunday final round, while first trying to chase down the lead, then trying to protect it, the misses sting just a little more.

Don’t get us wrong. Morikawa did miss. He didn’t go 18 holes played, 18 putts made. But they repeatedly dropped when they needed to. He’d win by two shots, his second major championship, both before he turns 25 next year. Clutch is an impossible thing to quantify, but at least one analyst, himself a major champion, believed Morikawa’s putting on Sunday was historical in that regard.

“Some of the best clutch putting we’ve ever seen,” Paul Azinger said on the NBC broadcast.

Consider, too, the fact that he both switches between two putting styles — beginning this week, he employed a “saw” putting grip for shorter putts and a traditional grip for longer ones — and that before last week’s Scottish Open, he had not played a true links-style tournament, and the putting performance becomes more remarkable. Even the champ himself was impressed. When asked afterward where he would rank “that putting display today,” Morikawa said:

“Definitely one of the best, especially inside 10 feet. I felt like it was as solid as it’s going to get. I don’t think I really missed many from that distance. Especially in a major. I think in a major on a Sunday in contention, I wasn’t thinking about anything other than making a putt.”

Half of Morikawa’s holes finished with tap-in range putts. The other half required a little more work. A look at the latter, in order of play:

500-yard par-4 4th: Here, after hitting over the green and pitching on, Morikawa rolls in a 7-footer for par. It pulls him into a share of the lead with Louie Oosthuizen.

183-yard par-3 6th: Morikawa misses a 35-footer for birdie, but makes the 4-foot comebacker. “This will do your head a lot of good if you can make it,” Azinger said beforehand on the broadcast. “Good, solid putt there, and it calms your brain.”

461-yard par-4 8th hole: Morikawa sinks a 6-footer for birdie, and his lead is now three. The hole earlier, Morikawa made birdie while Oosthuizen doubled.

403-yard par-4 9th hole: Morikawa makes an uphill 15-footer for birdie, his third straight birdie, and he continues to lead by three, now over Jordan Spieth.

425-yard par-4 10th hole: Morikawa hits his approach left of the green, he pitches on, then rolls in a right-to-left 15-footer to maintain his advantage. “Well this guy’s self belief is off the charts,” Azinger said on the broadcast. “There’s no lag or layup in him.” “He’s just unflappable,” announcer Dan Hicks said.

253-yard par-3 11th: Morikawa hits his tee shot to 50 feet, and his birdie putt falls short, to the right and about 3 feet away. “These are the ones that will put hair on your chest,” Azinger said. “These are tough putts.” Morikawa makes it, and his lead is three over Spieth and Oosthuizen.

554-yard par-5 14th: Maybe the putt of the tournament. His lead now one over a charging Spieth, Morikawa pitches on with his third shot to about 15 feet. “You got to be conscious of your speed here in that the first several feet is so distinctively uphill,” analyst Jim “Bones” Mackay said on the broadcast. “It’s hard to get the pace right and keep it within a few of the hole should it not go in.” It does, down the middle, and Morikawa leads by two over Spieth. “He’s got the guts of a burglar,” Azinger said.

496-yard par-4 15th: If 14 isn’t the biggest putt, then 15 is. Morikawa, after hitting his approach left of the green, pitches to 7 feet, then drops it for par. “What a gut check, and he answered,” Azinger said on the broadcast. “It’s really unbelievable,” analyst David Feherty said.

155-yard par-3 16th: Morikawa misses a 30-footer for birdie short, but cleans it up for par to keep his two-shot lead over Spieth. Morikawa would par out from here to win the Claret Jug.

In all, he would finish with no bogeys over his last 31 holes, and he wouldn’t three-putt throughout the week.

“Yeah, everything about my stats say I’m not a good putter statistically. I feel like I can get a lot better. But in these situations, I feel like everything is thrown off the table. Forget about all your stats, who can perform well in these situations. That’s why I think over the past few majors you’ve seen a lot of the same names up there, because they believe in their game, they know what they’re doing when they practice, and they’re able to bring it out in these big moments.

“Thankfully, I was able to put it out there on Sunday today and close it out.”